In July 2012, on the same day that the National Assembly for Wales approved point of sale display bans for tobacco products in Welsh stores, the Welsh Government laid an amendment to Wales’ smokefree premises legislation to allow cast members to smoke on set for film and television productions. This move came despite 75% of respondents to the 6-week consultation in spring 2012 opposing such an amendment, a strength of feeling that has become increasingly evident as attempts to introduce the legislation have become more drawn out.

The creative industry claims it needs to compete with England, which has an exemption built in to its existing smoking legislation for the film and television industry to protect the “artistic integrity” of a performance. Yet these production companies are able to simulate a wide range of actions like drug taking, car crashes and shootings – so why should smoking, which kills 5450 people every in Wales, be any different?

A vote on the amendment was scheduled for the Assembly plenary in mid-October but a campaign to #keeptheban generated enough interest and concern to see the amendment referred to not one, but two, committees – Health and Social Care and Enterprise and Business – leading to a first for the Assembly, the creation of two sub-committees, sitting jointly and composed of equal numbers of members from both parent committees, to take evidence around the ban.

Committee hearings began in January 2013 with evidence from, amongst others, Cancer Research UK, the British Heart Foundation, ASH Wales and the BBC. The opposition of public health practitioners and supporters to the proposed amendment is clear, and the scientific research on the impact of second hand smoke was frequently referenced. Counter assertions about the loss of production investment to England have yet to be substantiated, with the BBC being forced to retract a claim that a story-line for prime-time UK hospital drama Casualty had to be dropped because it required filming a smoking scene.

Following three evidence sessions in January and February, with the report expected in mid-March, the announcement was made that there would be a further evidence session in June with both the Health and Enterprise Ministers, as well as the Chief Medical Officer for Wales and members of the Welsh Government’s executive creative industries units invited to give evidence. Despite the degree of opposition, the amendment has thus far refused to go away.

During a recent Welsh Government reshuffle, the most outspoken opponent of the amendment as chair of the Health Committee in the Assembly, Professor Mark Drakeford, was elevated to the role of Health Minister. Whilst this represents a potentially promising development for opponents of the amendment, it currently remains on the table.

If you are interested in finding out more about the #keeptheban campaign, please visit the ASH Wales website and sign the #keeptheban e-petition to register your opposition to the dilution of smokefree legislation in a country that was the first UK nation to call for a smoking ban and help  prevent Wales taking a step back in time. 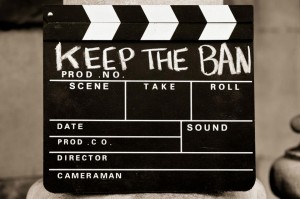