Thailand has long been at the forefront of tobacco control in Southeast Asia. On 8 March 2013, it took another step forward when the health minister Dr Pradith Sinthawanarong signed a regulation requiring 85% pictorial (graphic) health warnings on cigarette packs. Current pictorial warnings are 55%.

The regulation is expected to take effect in approximately six months, and will mean Thailand has the largest graphic health warnings in the world. Currently, Australia has the largest total area at 82.5% (75% of front and 90% of back). Uruguay has the largest overall with 80% on the front and back. Sri Lanka is set to also implement 80% warnings, pending regulations. Within the Southeast Asia region Brunei, Singapore and Malaysia also have pictorial health warnings. 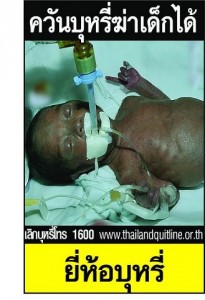 The move has been warmly welcomed by tobacco control advocates in the region. Southeast Asia Tobacco Control Alliance (SEATCA) Director Ms. Bungon Ritthiphakdee said: “SEATCA is ecstatic and would like to convey our heartiest congratulations to Thailand for its leadership in tobacco control. Its enactment of rules to put in place the largest GHWs on cigarette packs speaks to its political will and example to safeguard the health of its people.

With this development, however, SEATCA warned that the tobacco industry and related groups including tobacco farmers will likely lobby to fight and block the regulation. Just last month, the Thai Tobacco Trade Association submitted a letter to the Ministry of Health, Thailand, opposing the new health warning policy.

“When countries strengthen their policies, there is no doubt the tobacco industry will challenge the legislation especially measures that reduce tobacco consumption.  They have tried to delay Tobacco Control laws that are stringent, fight tobacco tax increases, and dilute bans on tobacco advertising sponsorship and promotions time and again,” Ms Ritthiphakdee adds.

SEATCA has recently launched a regional campaign to counter tactics of the tobacco industry to create fear and use tobacco farming to create opposition to the introduction of effective tobacco control measures. The campaign website (http://www.saveourfarmer.org) contains information about the economic contribution and costs of tobacco farming, health and environmental hazards, and contribution to government revenue.