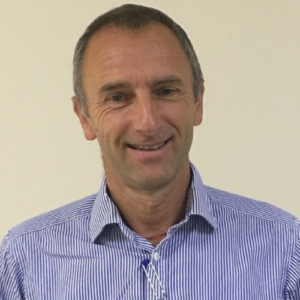 It will be only one generation between the time the bereavement counsellor arrives and the community of mourners disappears. The counsellor’s new tool will cut through the social fabric, throwing aside kinship, care, neighbourly obligations, and community ways of coming together and going on. Like John Deere’s plough, the tools of bereavement counselling will create a desert where a community once flourished.”

John McKnight, founder of Asset Based Community Development and the ABCD Institute, described in the annual lecture to the Schumacher Society, the unintended consequences of the mechanisation of farming upon the invention of the cast iron plough in 1837. The plough helped to take the boggy prairie and turn it into something suitable for agriculture. But within a few years, the land became unproductive as its ecosystems were destroyed. The Native Americans, who had lived in harmony with the land for thousands of years, were forced to move to reservations. The indigenous knowledge of how to look after the land was lost, as were the communities that had preserved and inhabited it. He uses the analogy with the development of the bereavement counsellor, with the consequent loss of the role of community, of ritual, of mutual support and loss of the depth of relationships that are the outcome of communities coming together, celebrating and sharing hardship.

Except that his predictions are worse that he describes. The care of bereaved people has become professionalised and this service is limited and rationalised. Not only have we lost the warm heartedness that comes with community grieving, we leave behind a wasteland of lonely people who do not know where to go for support. 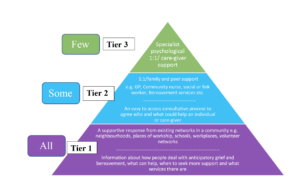 The model for bereavement, described by Penny and Relf on commissioning for bereavement services, postulates that bereavement services should be arranged so that those with complicated grief should see specialist services. (Penny and Relf, 2017) Estimates of percentage of people who need this Tier 3 support is in the region of 10%. Tier 2 support, professionally led but not specialist, is estimated to be 30% of the population. But 100% of people need Tier 1 support, the love, laughter and friendship that is the bedrock of community relations. This 100% is largely left to chance. Specialist and generalist palliative care providers do not routinely take a public health approach to bereavement, working to directly enhance the lost communities of support described by John McKnight. Assumptions have been made that the community will take care of itself. Furthermore, any form of bereavement support should be overseen by professional services. After all, safety comes first and who would recognise a severe bereavement reaction in a community group, or a bereavement café, or an informal gathering of friends? How would they stop a suicide with contact with professional services? The risk of risk aversion leads to paralysis. It is better to do nothing rather than risk being sued.

Support for bereavement has always dwelled in the heart of communities, in the wide variety of cultural ways that have developed all over the world. Professional bereavement services are but a blink of the eye of recent human history. And these communities of support are still to be found. The Good Grief Festival is an example of the broad range of community sources of grief support, as is The Grief Gang podcast started by Amber Jeffrey, The New Normal Charity and the many other groups that can be found in person and on line. The loss of the longstanding cultural supports for grief are having to be reinvented. Public Health Palliative Care practice is clear. Grief support starts in the community. It is contained in our workplaces, our institutions, our places of worship and the other domains described in the Compassionate City Charter(Kellehear, 2015). Grief support, the kindness of one person to another during a time of loss, does not need professional permission or supervision. Professional services do, however, need to participate in stimulating these community sources of support, without guiding, without interference and without taking control.

Bessel Van Der Kolk, in his book The Body Keeps the Score, summarises the importance of human connection

“Social support is not the same as merely being in the presence of others. The critical issue is reciprocity, being truly heard and seen by the people around us, feeling that we are held in someone’s mind and heart. For our physiology to calm down, heal, and grow we need a visceral feeling of safety. No doctor can write a prescription for friendship and love. These are complex and hard earned capacities.”(van der Kolk and Sky, 2014)

Compassionate Communities UK are holding an evening discussion about community sources of support for bereavement on October 12th. The film Beyond the Mask will be shown and this will be followed by a discussion hosted by Dr Julian Abel and will include Jane Harris and Jimmy Edmonds, the film makers, Dr Kathryn Mannix, Dr Lucy Selman and Amber Jeffrey. Tickets available at https://www.eventbrite.co.uk/e/166638368847 Suggested donation £5.