What do you do when a piece of debris in space sends out an end of life distress message via Twitter? This particular message read as follows: “Your people predict I will burn up in Earth’s atmosphere early 2017. You’ll get messages until then. I don’t want to die.”

I did a bit of research. ‘Fengyun’ is a piece of space junk. At the time of writing, it is orbiting Earth at 28,000 km/hr. Fengyun, and two other pieces of space debris form part of ‘Project Adrift’, devised by Cath Le Couteur and Nick Ryan. It is an artistic exploration of the secret world of space junk, and the problems with it. You can see a film about it here.

But let me give you a bit of the past medical and social history for this particular palliative care patient, before we look at approaches to managing his or her distress:
Fengyun was once an important part of Chinese weather satellite FY1C, until it was blown into thousands of fragments by an experimental anti-satellite missile. Fenyun might burn up soon, but millions of other pieces, including Fengyun’s estimated 2840 siblings, will continue to circulate. They are potentially dangerous, too; any one of them could crash into a working satellite, currently in orbit, which poses risks for telecommunication and security.

What are this particular satellite’s main ideas, concerns and expectations? I think someone, in not too kind and compassionate a way, has broken it to Fengyun that he/she is going to die. I think the bad news was broken via electronic means, given that it is highly unlikely that a face-to-face discussion will have occurred in space. Someone dropped the bombshell that Fengyun will die by burning, quote: “I’m atmosphere intolerant, it makes me burn, and I have until early 2017, and then it’s death by close orbit“. Fengyun is now understandably frightened and distressed.

It did remind me of palliative care encounters and stories here on Earth that I hear on a monthly basis. The way news is broken about inevitable death, due to, for instance, an illness like secondary cancer, is at times insufficient. “I was told over the phone that it’s terminal.”, or “They were on a big ward round, came to my bed, one person who didn’t introduce himself spoke to me from the end of the bed, and Bang: –You’re dying!- “ 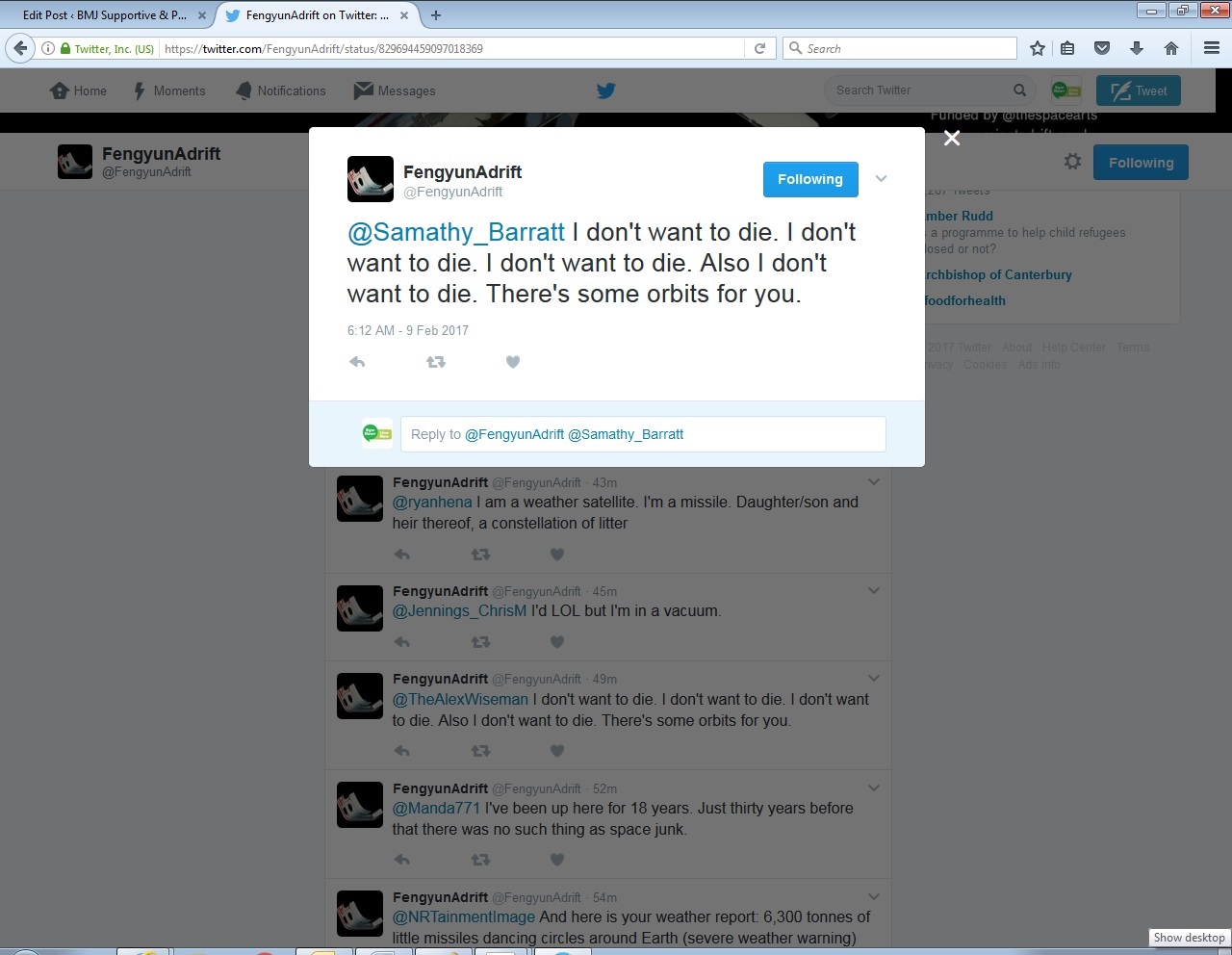 Of course, breaking bad news is a very complex communication task. In addition to the verbal component of actually giving the bad news, it also requires other skills. These include responding to a patients’ emotional reactions, involving the patient in decision-making, dealing with the stress created by patients’ expectations for cure, the involvement of multiple family members, and the dilemma of how to give hope when the situation is bleak. The complexity of the interaction can sometimes create serious miscommunications such as patient misunderstanding about the prognosis of the illness or purpose of care. Poor communication may also thwart the goal of understanding patient expectations of treatment or involving the patient in planning next steps.

Many doctors and nurses will have heard of various forms of guidance to delivering bad news, one of which is the SPIKES mnemonic (1) and I will try to summarise what I might have done initially to help Fengyun:

STEP 1: S—SETTING UP the serious illness conversation: get the setting right and ensure privacy (no space debris should enter the palliative care space station whilst I am talking to Fengyun). Also, ensure Fengyun has significant others with him/her, in this case perhaps @VanguardAdrift another piece of space flotsam who is in the upper reaches and not at imminent risk of burning up.

STEP 2: P—Assessing the Patient’s PERCEPTION
Before discussing the aeronautical and astronomical findings, the palliative care space practitioner uses open-ended questions to create a reasonably accurate picture of how the patient perceives the situation- what it is and whether it is serious or not. For example, “What have you been told about your orbiting situation so far?” or “What is your understanding of the reasons we ran the earth re-entry probability test?”.

STEP 3: I—Obtaining the Patient’s INVITATION
While a majority of satellites may express a desire for full information about their prognosis, some may not. When a clinician hears a patient/satellite express explicitly a desire for information, it may lessen the anxiety associated with divulging the bad news. However, not wanting information is a valid psychological coping mechanism and may be more likely to be manifested as things become more serious. Discussing information disclosure at the time of ordering tests can cue the physician/NASA scientist to plan the next discussion with the patient. Examples of questions asked of Fengyun might be, “How would you like me to give the information about the results of your orbiting pathway?”

STEP 4: K—Giving KNOWLEDGE and Information to the Patient
It is important to warn patients/satellites that bad news is imminent and this may lessen the shock that can follow the disclosure of bad news. Examples include, “Unfortunately I’ve got some bad news to tell you” or “I’m sorry to tell you that…”.
It is vital to start at the level of comprehension and vocabulary of an individual patient. Importantly, try to avoid technical words like ‘atmospheric drag’, ‘biopsy’, or ‘aerodynamic heating’. Ideally try to give information in small chunks and check periodically as to the satellite’s understanding. And avoid phrases like “There is nothing more we can do for you.” This attitude is inconsistent with the fact that satellites and patients often have other important therapeutic palliative goals such as good pain control, listening to good music including ‘Satellite of Love’ by Lou Reed and of course being listened to and understood.

STEP 5: E—Addressing the Patient’s EMOTIONS with Empathic Responses
This one seems obvious, but there are a few things to bear in mind. Responding to the individual’s emotions is one of the most difficult challenges of breaking bad news. Emotional reactions may vary from silence to disbelief, crying, denial, or anger.
When we get bad news the emotional reaction is often an expression of shock, isolation, and grief. For instance, Fengyun posted the following on 09/02/2017: “I’ve gone 4,290,595,779 km since I was born and still have no purpose other than speed and mass.” In this situation the good palliative space physician can offer support and solidarity to the patient by making an empathic response. For instance, after you have given the satellite a brief period of time to express his or her feelings, let it know that you have connected the emotion with the reason for the emotion by making a connecting statement, such as “I can see that this is upsetting news for you”.

STEP 6: S—STRATEGY and SUMMARY
Satellites with a clear plan for the future are less likely to feel anxious and uncertain. Before discussing a plan, it is important to ask them if they are ready at that time for such a discussion. Clinicians are often very uncomfortable when they must discuss prognosis and treatment options with the patient, if the information is unfavorable. The reasons for this can vary but are often down to uncertainty about expectations, fear of destroying hope, fear of their own inadequacy in the face of an uncontrollable course of action, not feeling prepared to manage the anticipated emotional reactions, and sometimes embarrassment at having previously painted too optimistic a picture.

In summary, it is vitally important to keep in touch and follow things up. Sometimes, Fengyun, when the patients I see know that time may be short, they initially react with shock, but many take solace in the fact that we all must face death at some point in our lives, and that others have gone through similar experiences. And that there is always something else that can be done. There is nothing new under the Sun.

Iron deficiency in patients with cancer: a prospective cross-sectional study