Dr Howard Ryland is a Registrar in Forensic Psychiatry at South West London and St George’s Mental Health NHS Trust.  He was previously National Medical Director’s Clinical Fellow at the Academy of Medical Royal Colleges and the Vice-Chair of the Academy’s Trainee Doctors’ Group.  He is a member of the Academy’s Quality Improvement Task and Finish Group.

The Academy of Medical Royal Colleges Quality Improvement Task and Finish Group.  It doesn’t exactly trip off the tongue, but it certainly sounds important. And indeed it is.  The increasing focus on quality improvement and patient safety has been heralded by an explosion in the number of publications over the last few years, where the literature was previously rather threadbare (Davidoff et al., 2008). Quality improvement (QI) has been steadily moving up the agenda, with the associated language imprinting itself on the common consciousness (The Health Foundation, 2010).

Audit has long been heralded as one of the pillars of clinical governance and something that all trainees should involve themselves in. Compliance has been monitored through the ARCP process, with minimum requirements imposed.  Historically little attention has been paid to the rigour of the audit work undertaken or the usefulness of the outcome. This approach has drawn criticism of a tick-box exercise that encourages simple task completion, rather than fostering deep understanding of the core principles or underlying intentions of audit (Kidd, 2015).

The Academy’s group aims to draw on the burgeoning evidence and political will behind quality improvement and translate it in to effective training for medical trainees (Shojania & Grimshaw, 2005).  Despite the focus on doctors there is a clear recognition that health systems are complex and involve professionals from a diverse range of backgrounds interacting. Instead of a simplistic approach that seeks to just mandate quality improvement in the way that audit has been, the Academy’s approach aims to address all aspects of the quality improvement experience.  It aims to do this through dividing and conquering with its four sub-groups, looking at curriculum development, QI training, supporting infrastructure at multiple levels, and mapping resources/multiprofessional ways of working.

The work aims to address several key ‘elephants’, which have long been lurking unacknowledged in the medical training ‘room’.  Firstly, what is the relationship between QI and audit?  Is audit just a subset of QI or does it have distinct attributes? Secondly, how can a parity of esteem with research be achieved?  Trainees tend to be heavily incentivised to undertake activities that fit neatly in to the narrow concept of traditional research.  The production of papers on esoteric elements of basic science is often rewarded with career progression; yet the equivalent effort invested in the pragmatic implementation of evidence to improve clinical practice frequently yields minimal formal acknowledgement. Thirdly there is the question of engagement by senior clinicians. What will it take to get these key players on board with this concept?  Fourthly, the diversity of patient involvement in QI has been explored and how may we work most effectively in partnership. Finally, the big one: How are people going to find the time to learn about and practice QI?

A showcase event on 3rd November 2015 brought out the main messages and central recommendations of the group.  The importance of high quality patient care was powerfully underlined by James Titcombe, whose infant son tragically died in Furness General Hospital, prompting the Kirkup inquiry in to the maternity unit there, revealing serious shortcomings (Kirkup, 2015). He spoke eloquently of how his previous experience as a project manager for the nuclear industry had informed his current role as a National Advisor on Patient Safety, Culture and Quality for the Care Quality Commission (Titcombe, 2015). He described how those who reported incidents would be entered in to a raffle to win a iPad and a fitter who had admitted to breaking some insulation was given an award instead of being reprimanded. What if a similar culture existed in the NHS?

There was recognition that QI training is important and requires adequate resourcing. The hotly anticipated publication of the General Medical Council’s Generic Professional Capabilities may add greater urgency to the need to integrate QI learning in to curricula, but the focus at the highest level needs to be flexible (General Medical Council, 2016).  Inevitably learning about QI will be incremental, with skills being acquired in a progressive fashion, starting in undergraduate years and developing throughout postgraduate training and beyond.

What is clear is that there is a huge range of diverse resources available, from intensive hi-fidelity simulation courses to democratic MOOCs.  Hubs that bring these resources together would be of enormous benefit to all, guiding the bemused neophytes and networking the QI connoisseurs.  However this is achieved, signposting will be key and there is a need to link up like-minded individuals, so that a process of effective mentoring can occur.

Other important questions were posed, such as how would the effectiveness of any changes be evaluated?  When attempting to implement such a diffuse programme of educational change, how will it be possible to know if the desired downstream impact of improved patient care has been achieved as a result of these efforts?

The final report, entitled ‘Quality Improvement – Training for better outcomes’ is to be published in March, which will set out the group’s recommendations.  This will represent a hugely exciting opportunity to enhance the training that doctors receive in QI and will represent another step towards bringing QI to its rightful place centre-stage.

Kirkup, W., 2015. The Report of the Morecambe Bay Investigation.

The Health Foundation, 2010. How do you get clinicians involved in quality improvement? London.

Saru Bhartia has completed the Improvement Advisor Program at the Institute for Healthcare Improvement and Advanced Lean Training at Virginia Mason Institute. She leads a portfolio of quality improvement projects spanning clinical and non-clinical services at Sitaram Bhartia.

Change is always hard and most of the times we hate to change. Often, attempts to change or improve in an organization are met with resistance, making failure and frustration the common outcomes of change initiatives.

In the summer of 2012, I was two years into my new position as Quality Manager at our family-founded nonprofit hospital.  I had earlier completed the ten-month Improvement Advisor Professional Development Program of the Institute for Healthcare Improvement and become one of earliest professionals with such a certification in India.

Yet my two projects attempting to improve cleanliness of public toilets and availability of quality linen had failed.  I was beginning to question the applicability of the methods I had learnt in the Indian setting.

Triggering Incident: Changing the status quo can sometimes  begin with the most unassuming catalyst. And that’s exactly what propelled our third major improvement project at Sitaram Bhartia.

One of our consultants complained to our medical director about her patients not being able to reach her through the telephone exchange, moving us towards addressing this issue. This time, we succeeded and managed to reduce missed calls to the hospital telephone exchange from about 26% to 8%. Clearly, something was different that led to success, but what?

The Story of Our Change: Engaging Frontline Staff

As I’d mentioned earlier, success had evaded us with earlier improvement projects. However, this time, we had two major differentiating factors on our side:

So how did we make it happen?

Mid-Journey Roadblocks
The meeting was held in a typically formal manner with the manager doing most of the talking.  It failed as the staff did not participate in the discussion. This was the first time the management was asking the staff for their opinion and the staff was a bit suspicious.

We were disappointed with the initial failure but we brainstormed again and set up another meeting – this time for generating ideas for reducing missed calls at night. The project team had already come up with a list of change ideas for reducing missed calls during the day and believed that they had covered everything; moreover, they felt the frontline staff would not be able to add anything further.

Simple Fixes for Large Obstacles: A Snorkel in Action
For the next meeting, we created an informal round table set up with the manager, a quality officer, and our telephone exchange staff.

The manager started the meeting by sharing what was working well in the telephone exchange and acknowledged the defects in the present system. She assured the staff that the idea of the meeting was not to point fingers but to understand system-related issues. Tea was served. The manager acted as a facilitator and the quality officer, Zorba Bahlvi, took notes. A change in the meeting format led to the staff feeling relaxed. Once the first staff member started talking, others joined in.

With the help of the frontline staff, we regenerated a list of change ideas. Some of the changes were implemented immediately – these were the “just do it” sort of ideas that required little effort and seemed like “no-brainers”. For some of the other change ideas we decided to run Plan-Do-Study-Act (PDSA) to test if the change would lead to an improvement.

Did we face any resistance this time? Unequivocally, no. Because the frontline was engaged in coming up with the list of change ideas there was no resistance in testing or implementing these new ideas.

You can read more about our project in the BMJ Quality Improvement Reports!

A Happy Ending for All

By the time we were done, we were looking at results we couldn’t have fathomed before getting started.

Morale in the department shot up.  Making a change seemed to become much easier.  I learnt that working with the right partner – an engaged department manager – was essential.  I learnt the critical role of the frontline staff. I also realized the importance of persevering through multiple failures as one tries to learn effective use of an improvement methodology.

At the time of writing this post, it’s my pleasure to report to you that since the telephone exchange project, we have taken up other projects in the laboratory, emergency room, labour room, operation theatre, and outpatient department – and all are progressing satisfactorily!

Here’s to new beginnings and forging ahead! And to hearing your stories of transformation! Share with us any change initiatives that you’ve had success – or failure – with. 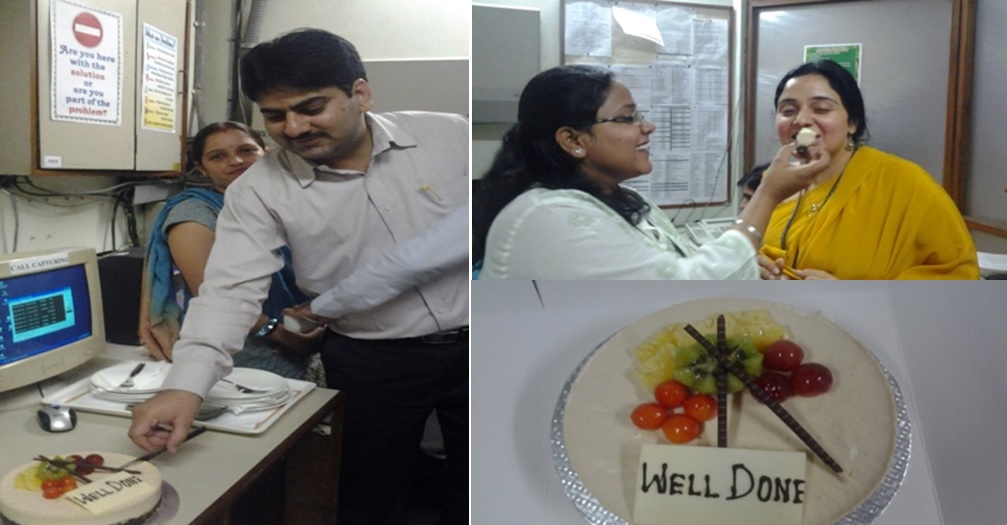 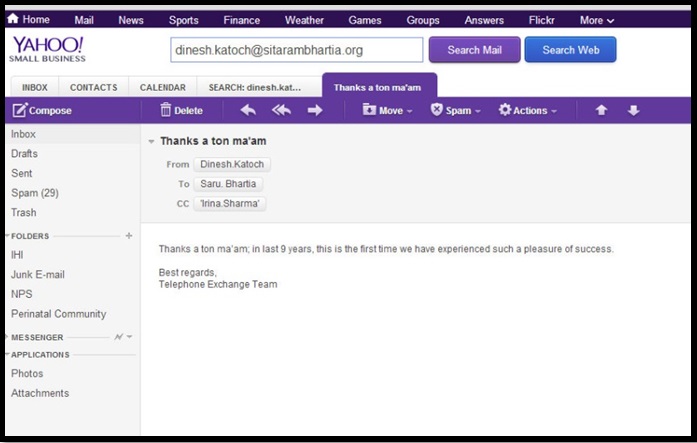