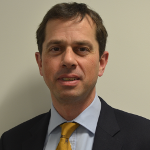 Aidan Fowler was a consultant colorectal surgeon in Gloucestershire for ten years before entering the NHS Leadership Academy Fast Track Executive Training Programme last year. Aidan is currently working as an executive at University Hospitals Bristol, trained as an Improvement Adviser with the IHI in Boston and was IA to the South West Safer Patient Programme. He currently works as faculty with the IHI particularly in the peri-operative safety domain.

When you talk to people in quality improvement, their journey often started with an event, an epiphany of sorts. So it was with my journey. I had been a colorectal consultant for several years when in 2007 C. diff became a really big problem. Here was a disease that we learned about at medical school as something of a piece of history that was once again causing morbidity and mortality, almost from nowhere.

I carried out a major operation for cancer on an elderly patient and then she came back for a stoma closure having done really well. This was supposed to be the minor bit. She had a single prophylactic dose of antibiotics and post operatively developed diarrhoea – you can almost see the rest of the story playing out: decision to perform a colectomy, worried and scared relatives, ITU placement and their feeling she would not survive surgery, deterioration and death. My initial reaction was to complain, point fingers, be angry – but what did that achieve? Typical of a surgeon you might say; my patient had died in “their” hospital because someone had not created a safe environment.

Then someone asked, “Why don’t you help?” We worked on antibiotic stewardship, hard fought, we cohorted, we used hydrogen peroxide atomisers, and the rate of C. diff fell dramatically. What had been the monthly rate became the annual rate and then fell further. We stopped doing colectomies as there was no need.
This was the power of QI. This was what happened when you moved up a level and looked at the bigger picture without ever forgetting each individual. No-one was thanking us for saving their life, they didn’t know we had, but this work had done exactly that.

What came next was a search for knowledge in the field, a spell with NHSII, and then finding the IHI and going through their Improvement Advisor Professional Development Course. This gave me the knowledge to apply to a large, multi-provider collaborative in the South West which achieved a significant reduction in HSMR for the region. There are many things one learns on a journey like this, but I am very struck by the shifting of the norms. As I contemplate a talk to a Scottish group in a meeting about out of hospital cardiac arrest (which is not at all an area I understand) and what I should say to them, I think this norm shifting is key.

So what do I mean? Well, we used to think central Line infection was an unavoidable norm, get used to it, it happens. Even so, for three months on the South West programme no acute provider in the region recorded one in their critical care unit. This stopped us from thinking that it just happens and started us thinking about how this should not and need not happen anymore; a dramatic culture change that meant our whole approach changed.

The safest hospitals in the world have huge knowledge, great and usually tenacious leadership, and values and vision. But they also have the ability to think in different ways and not let current reality get in the way of future possibility; the problems of today do not have to be the same tomorrow. Things we thought impossible a few years ago are happening now. Have the courage to challenge and think differently, and keep it simple – what do you want done to you and yours when experiencing healthcare. Now go and make that a reality for everyone.