Rocking the boat and staying in it: how to succeed as a radical in healthcare

Helen Bevan (@HelenBevan on Twitter) works with NHS Improving Quality, the national improvement team for the NHS in England. 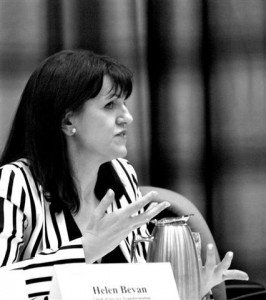 Anyone who chooses to be a change agent or improvement leader in healthcare doesn’t choose an easy life. There are so many forces opposing the changes we want to see; a system that rewards people for “keeping the trains running” rather than radical change, those with the power and/or a vested interest in keeping the status quo, colleagues and leaders who are sceptical, apathetic or scared of change.  Many times in my career in improvement, I have felt isolated, vulnerable and misunderstood. People have treated me like some kind of oddball when I have craved to be taken seriously and appreciated for my efforts as a leader of change. Yet big change only happens in healthcare organisations because of heretics and radicals; the courageous, passionate people who are willing to take responsibility for change, who support their organisation in its mission but also challenge the status quo.

The hope of healthcare rests with the non-conformists, the radicals, the heretics and mavericks in our midst.

So who are the radicals in healthcare organisations? Research by Debra Meyerson  shows that the most effective radicals are those who have learnt to oppose and conform at the same time. Or, as she puts it, “they are able to rock the boat and yet stay in it”. These are change leaders who stand up to challenge the status quo when they see there could be a better way. They develop the ability to walk the fine line between difference and fit, inside and outside. These leaders are driven by their own convictions and values which makes them credible and authentic to others in their organisations. Most importantly of all, they take action as individuals that ignite broader collective action that leads to big change. These leaders already exist in every healthcare organisation, in many different roles and multiple levels. They aren’t typically the Chief Executives or senior clinical leaders yet the impact of their change activities are often just as significant. We saw so many examples of this on NHS Change Day 2013. Many organisation-wide change efforts that led to tangible improvements for large numbers of patients were initiated by grass roots front line leaders.

Lois Kelly has developed some fantastic resources for “rebels at work” and I would recommend a trip round her website to all healthcare radicals. Helpfully, she makes the distinction between a “rebel” and a “troublemaker” and I have adapted her table below.  As rebels, we continuously seek innovative new ways of delivering care. We are committed to the patient-centred mission and values of our organisation. We are driven by our passion for better care for patients. We are optimistic about the future, the potential for change and see many possibilities for doing things in different ways. We generate energy for change which attracts others to unite with us for a common cause

“Troublemakers” also challenge the status quo but in a way that is very different to “rebels”. Troublemakers complain about the current state of affairs but their focus tends to be around their own personal position rather than achieving the goals of the organisation.

They are angry about how things are and don’t have much confident that things will get better in the future. They alienate other people because if others link with them, troublemakers will sap their energy. This just confirms what troublemakers probably know already– they don’t belong.

There are a couple of points I wanted to make about rebels and troublemakers. Firstly, many organisational leaders view ANYONE who challenges the status quo as a troublemaker, Therefore, rebels get unfairly labelled as troublemakers. It has happened to me on more than one occasion. It feels SO unjust but we are to be effective change agents, we have to anticipate that it might happen and learn to deal with it. Secondly, lots of change leaders  in healthcare start out as rebels but their voice doesn’t get heard, they begin to stridently question the status quo in a manner which is radical and self-defeating and they cross the line from rebel to troublemaker. As rebels, we have a responsibility to look out for this and try to prevent  it happening by building relationships and forming alliances with others who challenge the status quo.

So what are the tactics to survive and thrive as a radical/rebel/heretic/maverick in healthcare? I would like to suggest four:

I will discuss each of these issues in turn in my next four blogs. If you would like a preview on these topics, you can watch this short film

We are architects and scouts into the future, and we want to guide our organisations in navigating a safe path from now to then:

With a cause to do good

Leading by being from our true selves

Going after the un-named quality

Calls to action for this week