I’m typing this blog on the living room floor, under the air con.  The south-east of Australia is in the middle of a heat wave; my home town had four consecutive days with temperatures over 40 degrees Celsius (that’s over 104 degrees Fahrenheit for those playing in other parts of the world).

Bit of a celebration tonight though; the cool change has come through – currently 30 degrees outside (86F).

While admitting person after person for heat-related problems, I wondered what sort of neurological issues could arise in cases of extreme heat. 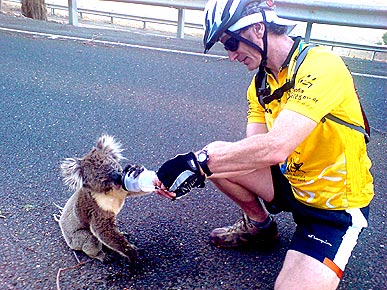 Here is a hot selection of articles from the archives of JNNP.
First, a beautifully written introduction to heat stroke, from Lorenzo et al:

“The most severe condition among the group of heat stress disorders is heat stroke (HS). It may be divided into two forms: classic & exertional. The former is due to environmental heat exposure and characterised by hyperthermia (above 40C) and neurological dysfunction (headache, delirium, convulsions and coma). Exertional HS affects subjects performing strenuous exercise in heat environmental conditions and is characterised by more severe symptoms than the classic form. Residual neurological defects have been reported in up to 20% of exertional HS survivors”. 1

This article continues on to describe the case of a 45 year old female who suffered exertional HS after hiking for several hours during the middle of a very hot day. She presented to hospital with abrupt loss of consciousness, and after being cooled, she gradually came to over several hours. She had motor coordination impairment and headache; the former recovered by time of discharge, but the headache continued on.

18 months later she was seen in an outpatient headache clinic, with ongoing daily headaches, not relieved with various NSAIDs, steroids or tramadol. After some adjustment of medications, the headache was successfully treated with amitriptyline and gabapentin, and in time these were successfully tapered off. The authors conclude that the case represents new daily persistent headache, possibly induced by heat stroke.

Delving back to almost 30 years ago, I uncovered this piece: ‘Spinal cord lesions in heat stroke’2, from Spanish authors Delgado et al. This is a case study of a 66 year old man who died 15 days after suffering heat stroke. The gentleman was an in-patient in a psychiatric unit, and had endured a heat wave with temperatures up to 38 degrees, with no air conditioning. He came to medical attention after three hours of remittent right-sided somatomotor partial seizures with secondary generalisation, that resolved with IV clonazepam. Initial neuro exam was normal except for moderate drowsiness & mental confusion. CT scan & CSF were normal, and EEG recording was diffusely slowed (5 Hz).   12 hours after admission, he developed quadreplegia, needed intubation & ventilation, but had preservation of cranial nerves & conscious state. Throughout the duration of his admission he was not seen to sweat, requiring ongoing physical cooling.

He remained just so for 14 days, when he suddenly died.

Pathology results revealed severe lesions in the anterior and intermedio-lateral horns of the spinal cord. As this patient’s only apparent insult was hyperthermia, it is suggested that the motor neurons & vegetative neurons of the spinal cord are specially sensitive to hyperthermia. A very interesting read, including figures of histology slides.
‘Downbeat nystagmus from heat stroke’3 is a letter to the editor documenting the case of a previously well 22 year old man who collapsed during a run. On presentation, he had a core body temperature of 39 degrees and was incoherent and combative. Several days into admission he complained of blurred vision, and was found to have downbeat nystagmus, associated with a midline cerebellar syndrome. MRI with DWI was normal. LP was normal. Thiamine and magnesium did not improve the nystagmus. The patient was lost to follow up, however, the authors felt it may be that the vermal cerebellum and vestibulocerebellum may be particularly susceptible to thermal injury.

So, for those fellow Aussie heat-wave sufferers, keep cool, invest in air-conditioning, and avoid strenuous activity in the heat of the day.

Go to Journal Club in your lunch break instead.