Osteogenesis imperfecta (OI) is a group of disorders, mostly autosomal dominant, inherited characterized by susceptibility to fractures, resulting from a type 1 collagen defect. Although many autosomal recessive genes have been shown to cause OI in recent years, there are still patients whose molecular defect is still unknown. In this study, we described recurrent fractures, bluish sclerae, bowing of lower limbs and short stature in five infants from two unrelated Turkish families. Two different homozigous pathogenic variants, in a novel candidate gene, PHLDB1, were shown to cause this mild OI phenotype in these families. The demonstration of decreased PHLDB1 mRNA expression levels in blood and fibroblast samples with different pathogenic variants supported the hypothesis that these variants were causative for the observed phenotype. (By Prof. Beyhan Tüysüz, https://jmg.bmj.com/content/early/2022/12/21/jmg-2022-108763 ) 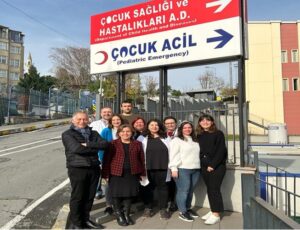