Epilepsy is a common neurological disorder featured by the recurrence of unprovoked seizures. The etiologies in the majority of patients with epilepsy still keep unknown. This study identified a novel causative gene of epilepsy—BSN gene. BSN gene encodes Bassoon, an essential protein to assemble the cytomatrix at the active zone of neurotransmitter release. In this study, BSN variants were identified in eight unrelated cases with favorable outcome by using whole-exome sequencing. The pathogenic missense variants tended to gather at C-terminus of Bassoon. Clinically, the patients with monoallelic BSN missense variants were associated with benign epilepsy and achieved seizure free without treatment or under monotherapy, while the majority of patients with biallelic missense variants presented frequent seizures and required combined therapy, even had neurodevelopmental delay. These findings suggested the phenotypic severity of BSN variants was associated with the genotypes and the molecular sub-regional effects. (By Dr. Xiaorong Liu, https://jmg.bmj.com/content/early/2022/12/12/jmg-2022-108865 ) 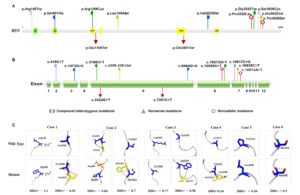