The 5α-reductase type 2 (5α-RD2) deficiency caused by mutations in the steroid 5α-reductase 2 (SRD5A2) gene results in variable degrees of undervirilization in patients with 46,XY disorders of sex development. Through a multi-center cooperative effort, 190 Chinese subjects diagnosed with 5α-RD2 deficiency were consecutively enrolled, representing the largest case number so far. Based on this, the study characterized in detail the phenotypic features of 5α-RD2 deficiency and the regional distribution of SRD5A2 mutations in Chinese population. Several variants were highly prevalent, with distinctive distribution patterns between North and South China, suggesting a putative founder gene effect in the population. Furthermore, thirteen novel variants of SRD5A2 were identified, further expanding its mutational spectrum. Additionally, genotype-phenotype correlation analysis provided critical evidence that different variants of SRD5A2 may be correlated with the expressivity of the disease. (By Baoheng Gui and Prof. Chunxiu Gong, https://jmg.bmj.com/content/early/2019/06/11/jmedgenet-2018-105915 ) 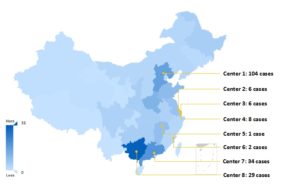