Williams-Beuren syndrome is a neurodevelopmental disorder caused by a deletion at chromosome 7q11.23. It is characterised by a hypersocial neurocognitive profile,  often defined as a “cocktail party” personality. However, the prevalence of Autism Spectrum Disorder is higher among patients with Williams-Beuren syndrome, a striking finding considering their opposite phenotype. Here, we study eight individuals with Williams-Beuren syndrome and Autism Sepctrum Disorder at the molecular level. We did not find a common deletion mechanism or common pathogenic variants in the non-deleted 7q11.23 copy. However, we identified several rare variants in autism candidate genes, with a higher burden in females compared to males, as well as a patient with a de novo nonsense mutation in the candidate gene UBR5. (By Dr. Ivon Cuscó Martí, https://jmg.bmj.com/content/early/2019/08/14/jmedgenet-2019-106080 ) 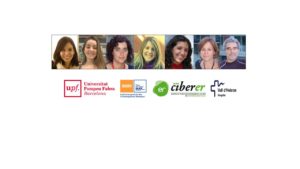