Male infertility due to multiple morphological abnormalities of the sperm flagella (MMAF) is a genetically heterogeneous disorder. Previous studies revealed several MMAF-associated genes, which account for approximately 60% of human MMAF cases. The pathogenic mechanisms of MMAF remain to be illuminated. In this study, we identified SPEF2 as a novel gene for human MMAF across the populations. The functional assays further demonstrated the pathogenicity of SPEF2 mutations and the involvement of SPEF2 in human MMAF. Our findings revealed a new human MMAF-associated gene, which will be informative in the molecular diagnosis and genetic counseling of infertile men with oligoasthenoteratozoospermia. (By Dr. Feng Zhang, https://jmg.bmj.com/content/early/2019/05/02/jmedgenet-2019-106011) 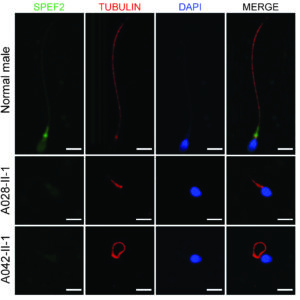