“Methylglutaconic aciduria, Deafness, Encephalopathy, Leigh-like” syndrome (MEGDEL syndrome) is a genetic disease caused by mutations in a gene named SERAC1, which is involved in the metabolism of specific lipids, so-called phosphatidylglycerols. MEGDEL syndrome typically presents with progressive deafness, motor symptoms (i. e. dystonia) and additional features (e. g. neonatal sepsis and liver failure) with onset in early childhood. In our study, we now show that this classic infantile phenotype represents only ONE far-end of what is actually a broad continuum of SERAC1 disease. This spectrum includes, on the other end, also much later, oligosymptomatic presentations of teenage-onset complex hereditary spastic paraplegia (cHSP). Our findings thus unfold a SERAC1 disease spectrum of variable disease severity and add SERAC1 to the increasing list of cHSP genes due to disturbances in lipid metabolism pathways. (By Dr. Benjamin Röben, http://jmg.bmj.com/content/early/2017/09/15/jmedgenet-2017-104622 ) 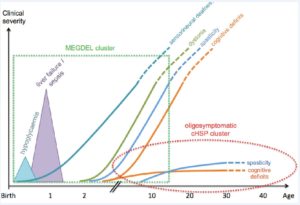