Hydranencephaly, a congenital anomaly caused by destruction of the cerebral hemispheres is usually found in isolation. We report a family in which three fetuses displayed multinucleated neurons, anhydramnios, renal dysplasia, and cerebellar hypoplasia together with hydranencephaly, a novel syndrome we have named MARCH. Sequencing revealed the cause to be a homozygous truncating mutation in CEP55, a cell cycle regulator. Knock-down of the CEP55 ortholog in zebrafish reproduced the brain and kidney defects, and were rescued by full-length, but not truncated human CEP55. When we expressed truncated CEP55 in human cells, the protein failed to localize properly, producing multinucleated daughter cells. Our results implicate a faulty centrosomal protein as the cause of this lethal multiple anomaly syndrome. (By Dr. Patrick Frosk, http://jmg.bmj.com/content/early/2017/03/06/jmedgenet-2016-104296 ) 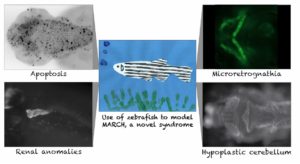