Tonsillectomy is one of the most common surgical procedures in children and young adults and may be recommended in patients who experience recurrent throat infections. Using Danish health register data, we screened the genomes of more than 3,000 tonsillectomy patients and 13,000 controls. Thereby, we identified variants in the gene HORMAD2 significantly associated with tonsillectomy. It is notable that the top associated genetic variant was previously reported to increase the risk of IgA nephropathy, a rare autoimmune disease that affects the kidneys, while it was also reported to decrease the risk of inflammatory bowel disease. Our results underline the complex genetic regulation of the mucosal immune system and its effect on different diseases. (By Dr. Bjarke Feenstra, http://jmg.bmj.com/content/early/2016/12/07/jmedgenet-2016-104304 ) 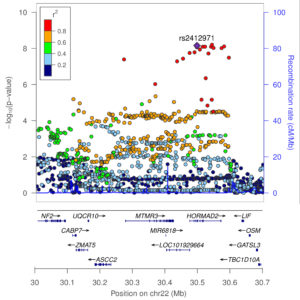 Regional association plot for the tonsillectomy locus on chromosome 22, showing SNP position (x axis) and association with tonsillectomy (-log10 p value; y axis). The top SNP, rs2412971, is represented by a purple diamond, and the other SNPs are colored to reflect their correlation (linkage disequilibrium) with the top SNP. The blue lines show estimated rates of recombination based on data from the HapMap project (right y axis). The names and positions of HORMAD2 and other genes in the region are shown in the lower part of the figure.