Damage to movement-related brain networks distinctively impairs processing of action verbs (words denoting bodily motion). Can genetically-based deterioration of relevant regions involve similar deficits? To address this question, we assessed lexical processing in a unique patient with cerebellar ataxia due to mutations in the STUB1 gene. By combining structural and functional MRI with genetic and behavioral analysis, we found that such genetic abnormalities are related to selective action-verb impairments, further showing the distinct role of the cerebellum and its connections to semantic- and motor-related cortical regions in processing those words. Our study opens new windows into the role of cerebellar structures and their genetic underpinnings in high-order domains. (By Dr. Agustín Ibáñez, http://jmg.bmj.com/content/early/2016/11/03/jmedgenet-2016-104148 ) 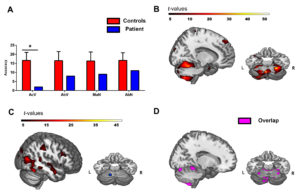