In this research, we describe 5 patients with a specific condition that we are referring to as Chitayat syndrome as the first patient with this condition was described in 1993 by Prof David Chitayat. Almost 15 years later, Dr Meena Balasubramanian saw a 5-month old baby with what appeared to be the exact same features as the patient described in 1993 including the similarities in facial appearance, hands and feet. Due to advances in genetic screening, we were able to identify a change in a gene usually known to cause premature fusion of the skull bones. This was puzzling as none of the patients presented with this. On further genetic testing, we were able to show the exact same gene change in the original patient described and in patients identified in Stanford (father and son) and Utah, demonstrating the power of studying human diseases to provide insights into development. Studies are ongoing to understand the function of this variant and whether there are possible therapies. (By Dr. Meena Balasubramanian, http://jmg.bmj.com/content/early/2016/10/13/jmedgenet-2016-104143 ) 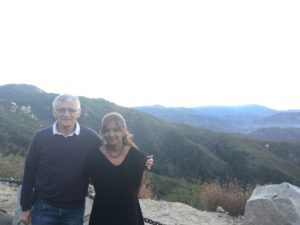 Photo showing David Chitayat and Meena Balasubramanian at the David Smith meeting, Lake Arrowhead, CA, USA this year where they presented this study.