Dyslexia and Language Impairment (LI) are common learning disabilities that make written and spoken language difficult to process for affected individuals. Both disorders have a strong genetic component, but inheritance is complex and individual risk variants have been difficult to identify. In this study, we show that alleles of READ1, a genetic variant associated with dyslexia, interact in different ways with KIAHap, a risk allele of another dyslexia-associated genetic variant, to influence performance on reading, language, and IQ measures. Risk alleles of READ1 synergize with KIAHap, such that the population effect of having both risk variants is worse than would be expected if they acted independently. By contrast, protective alleles of READ1 appear to remove the deleterious effect of KIAHap, neutralizing it as a risk variant. Our molecular experiments support a model in which READ1 is a genomic regulatory element, and in which the READ1-KIAHap interaction influences reading and language by modulating expression of the dyslexia-associated gene KIAA0319. (By Dr. Jeffrey Gruen, http://jmg.bmj.com/content/early/2015/12/11/jmedgenet-2015-103418 ) 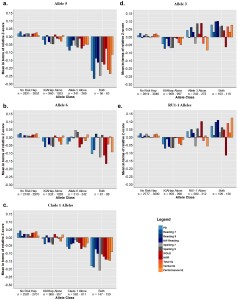