Noonan syndrome with multiple lentigines, (NSML) formerly known as LEOPARD syndrome, has overlapping features with other RASopathies. Except for neurofibromatosis type 1, other disorders that result from dysregulated RAS/MAPK pathway are not known to be associated with neurogenic tumors. We identified four patients from three families with NSML, progressive neuropathy, enlarged nerves, massive burden of paraspinal neurofibromas and a mutation in the PTP catalytic domain of the PTPN11 gene (p.Thr468Met and p.Thr279Cys). Analysis of hypertrophic nerve did not disclose a second somatic hit in NF1, PTPN11, NF2 or SMARCB1 genes. Neurogenic tumors and hypertrophic neuropathy may be under-recognized manifestations of NSML that would warrant surveillance. Our observation may also have implications for other disorders caused by RAS-pathway dysregulation. (By Drs. Dusica Babovic-Vuksanovic and Erin Conboy, http://jmg.bmj.com/content/early/2015/09/02/jmedgenet-2015-103177 ) 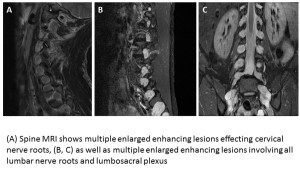