Neonatal diabetes (diagnosed under 6 months of age) is usually caused by a disruption (mutation) in one of over twenty diabetes-related genes. One of the most common causes of neonatal diabetes is mutations in the insulin gene that result in production of a misshaped insulin protein that leads to death of the insulin producing beta cells. We describe a new type of mutation, deep in the non-coding part of the insulin gene, that causes diabetes through a previously undescribed mechanism. This discovery extends our understanding of diabetes and may have broader implications for those with insulin deficiency later in life. (By Dr. David Carmody, http://jmg.bmj.com/content/early/2015/06/21/jmedgenet-2015-103220 ) 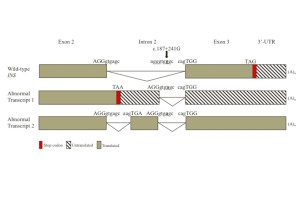