In February 2020, government Ministers at the 3rd Global Ministerial Conference on Road Safety hailed landmark progress toward road traffic crashes. Road traffic crashes are a much older public health crisis (compared to COVID19) as they are the 8th leading cause of death globally and the #1 killer of young people aged 5–29. Ministers’ endorsement of the Stockholm Declaration on Road Safety paved the way for a resolution to reduce road deaths and serious injuries by 50% by 2030 and set out the roadmap to achieve it. The momentum was tangible and the road safety community was optimistic that this could be the turning point in reducing the 1.35 million deaths that occur on the world’s roads every year.

A month later, the world abruptly changed. Social distancing put a stop to community projects, curfews and lockdowns brought busy roads to near-silence, media spoke of nothing but the growing pandemic, funders and corporations cancelled or put projects on hold, and road safety NGOs wondered what COVID-19 would mean for Sustainable Development Goal (SDG) 3.6, the Global Voluntary Performance Targets for Road Safety, the Stockholm Declaration, the upcoming UN General Assembly resolution debate (originally planned for April 2020), as well as their own survival as independent, community-based organizations.

COVID-19 presents a major risk toward reducing road deaths at global, national, and local levels. A strong NGO community is vital to push governments to be accountable for implementing the global road safety commitments in their countries and to move the Stockholm Declaration into action. Over the past 10 years, the profile and capacity of road safety NGOs has increased, leading to stronger multi-sectoral partnerships, increased value to local and national government, awareness campaigns, policy, data, infrastructure, and enforcement improvements.

The extent to which road safety NGOs were hit by the current crisis and the challenges they faced needed to be summarized to ensure sustainability of these organizations. The Global Alliance of NGOs for Road Safety (the Alliance) ran a series of consultations among its 239 members in 92 countries to understand the problems that they were facing and the support needed to ensure that a vibrant, well-equipped, global NGO community still exists when the pandemic eases.

Focus Groups: NGOs were invited to online focus group discussions (FDGs) using a semi-structured questionnaire between 1-3 April 2020. The purpose? To find out if and how their road safety work had been affected by COVID-19 and what support the Alliance could offer. 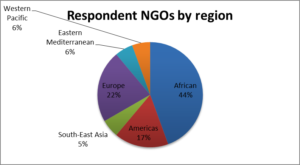 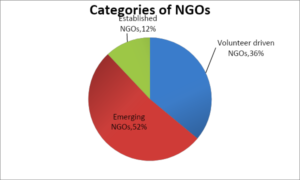 Funding installments postponed, proposals were on hold, or funds had not been paid because NGOs have not been able to deliver services in schools and communities during lockdown.

The extent to which they were affected and the longer-term impacts varied:

b.    Activities have been disrupted

Some projects have been cancelled while others have been postponed to a later, undetermined time in the future. Community programs were no longer feasible due to restrictions. Many NGOs work in schools, which are closed.

NGOs are trying to move online, including conferences, training, one-to-one consultations, and victim support groups, primarily using Zoom, Skype or other platforms. Not all work can be moved online, so NGOs were seeking new distribution channels that are still open to the public, such as supermarkets and hospitals. Some LMIC-based NGOs talked about the problem of engaging communities with poor internet bandwidth.

While all NGOs were disrupted and most were finding ways to adapt, established NGOs were better equipped to evaluate and adapt their work for the new, uncertain circumstances. In particular, they had analyzed what had to be done now, what could be rearranged, what could be postponed, cancelled, or adapted.

Volunteer absences and staff loss, affecting emerging and volunteer-driven NGOs most heavily. They often have small teams and no succession planning in place, so are reliant on retention of staff/volunteers.

Even established NGOs who reported that they were able to continue supporting staff expressed uncertainty about how long this would continue and fear of losing experienced staff due to job insecurity. In some high-income countries, NGOs were able to take advantage of furlough schemes where the government would pay part or all of staff’s salaries. While a great benefit, they reported a risk that staff and their skills and experience may be lost during furlough.

a.     Engagement with governments

Most NGOs are unable to reach government officials because they are focused on combating the pandemic.

“There is no one at the authorities to talk to and staff there do not know who to talk to or what to do either.” – NGO, Iran

Government engagement is primarily a concern for emerging and established NGOs, although some volunteer-driven NGOs also have government connections. Over the past five years, the Alliance has been building the capacity of emerging NGOs to advocate with their governments, as the most effective way to contribute to reducing road deaths and injuries.

Media was less focused on road safety and NGOs had to push extra hard to gain media attention.

Many NGOs had to change messaging. Initially responded by comparing COVID-19 with the number of people killed in road crashes. This messaging was not well-received by the public and it quickly became apparent that road safety should not be framed in competition with COVID-19. NGOs were mindful of not capitalizing on the current situation for their own agenda.

Despite low traffic volumes, excessive speeding has emerged as an issue across many countries, demonstrating that road safety remains painfully relevant. Some NGOs are framing specific road safety messages in the context of COVID-19 while others have adjusted their messaging toward reducing COVID-19 transmission, such as staying safe on public transport, or how to keep a vehicle hygienic. Others, mainly volunteer-driven NGOs and some emerging NGOs, have temporarily switched to pure COVID-19 messaging.

Empty streets, reduced air pollution, streets being cleared for walking and biking, reduction in traffic congestion, and appreciation of strong and responsive health systems are some of the more welcome impacts noted by NGOs during the pandemic that could contribute to reducing road crash-related deaths and injuries. They noted the willingness of the general public to take inconvenient preventative action in their everyday lives. If that commitment to behavior change was translated to road safety, it would save many lives.

“Can we help people to see cities in a different way following lockdown – remember what it was like when you could walk and cycle without being afraid of traffic? – living life without fear. We have a choice regarding the extent of motorized transport but we do not choose to take it. Now it has been forced upon us. Can we keep it?” – NGO, Netherlands

NGOs called for a unified message for road safety when attention on COVID-19 wanes. They proposed a joint campaign to reignite attention for safer roads and the Stockholm Declaration with focus on incorporating health, mobility, and environmental benefits:

“We have not had the chance to promote the Stockholm outcomes. There is a danger that they will have forgotten by the end: we will need to re-engage in a big way.” – NGO, Ghana

There is an urgent need for support to ensure that road safety NGOs are still standing after the current crisis and long-term strategies to strengthen NGOs and the road safety agenda. We must support this important group of champions and protect them from potential collapse.