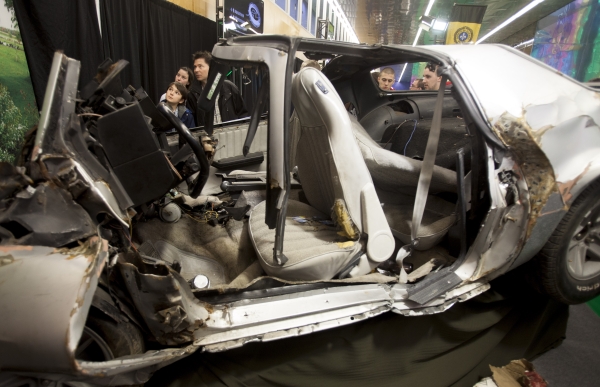 Rene Bruemmer contributed a powerful article to todays local paper, the Montreal Gazette, describing an exhibit at the International Auto Show. It is “the crumpled hulk of a 1982 Camaro in which two men died four months ago.” Apparently they “ran off a country road … driving fast on booze and worn out tires, with no seat belts.” What surprised the Surete Quebec (SQ), responsible for this safety message, was the positive response of most visitors. I was uncertain whether research has supported this shock strategy but Bruemmer writes: “Studies have shown youth respond more to hard-hitting awareness campaigns that spark an emotional response. The SQ had been searching for new ideas when this accident, which had all the risk factors associated with a disaster in waiting, occurred.” The display reminds viewers that in 30% of crash fatalities occupants are not belted and this number rises to 40% for occupants 16 to  24. Bottom line? According to the writer, “Unlike the Ferraris and the Bentleys, people were allowed to touch the wreck, and many did so, quietly. Most spent more time with the 30-year-old Camaro then they did posing for pictures with the Lamborghinis.”

I might add that several years ago I was asked what I thought the two most important preventable injury risk factors were and I replied, speed and alcohol. My views remain unchanged.