After the great #FGDebate with the SWiG-BSG Network Mentoring Team, we are delighted to announce our next #FGDebate with be a UEG Week on Tuesday 22nd September 2015, at 8-9pm GMT and will discuss, ‘Frontline Barrett’s: Screening, surveillance and therapy’.

Professor Rebecca Fitzgerald holds a personal chair in Cancer Prevention at the University of Cambridge. She is a tenured Programme Leader at the MRC Cancer Unit at the Hutchison-MRC Research Centre in Cambridge and she is a Honorary Consultant in Gastroenterology at Addenbrooke’s Hospital Cambridge.  She graduated from Cambridge University in 1992, performed a research degree at Stanford University, California (1995-1997) and then undertook specialist clinical training and postdoctoral research at Barts and The London Hospitals (1997-2001). Whilst at Barts funding from an MRC Clinician Scientist award was instrumental for Rebecca to continue her clinical training and also make progress with her laboratory research. She moved back to Cambridge in 2001 to the newly established MRC Cancer Unit (formerly the MRC Cancer Cell Unit) which had translational cancer research at the heart of it’s mission. A position within this unit was ideal for Rebecca since the focus of her research is to improve methods for early detection of oesophageal cancer through better understanding of the molecular pathogenesis.  Furthermore, being located in an MRC unit with core funding, embedded within a Cancer Centre, has been enabled Rebecca to conduct patient orientated research which requires time to build up the infrastructure and sample resource.

Rebecca was awarded the prestigious Westminster medal and prize for her first proof of concept work on the Cytosponge and associated assays for diagnosing Barrett’s oesophagus in 2004 and this received an NHS Innovation prize in 2011.  She received a Lister Prize Fellowship in 2008 and in 2013 Rebecca was awarded an NIHR Research Professorship to facilitate translational research for patient benefit.  In recognition of her work she has given the Goulstonian Lecturer at the Royal College of Physicians and was awarded the Sir Francis Avery Jones Medal from the British Society of Gastroenterology.  Rebecca enjoys teaching and communicating science to the public.  She directs studies for medical students at Trinity College Cambridge and is a Fellow of the Institute for Learning and Teaching.  She has a wealth of lecturing experience including radio broadcasts for BBC Radio 4 and ABC Radio Australia, Health of the Nation.  Rebecca is committed to bringing research advances into clinical practice and inspiring other researchers to do likewise.

In advance of the #FGDebate, the questions Professor Fitzgerald will try and answer include: 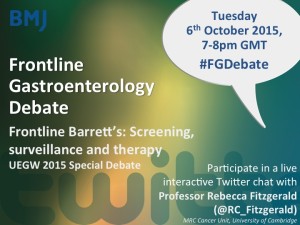