After the great success of the #FGDebate with Dr Alex Ford, we are delighted to announce our next #FGDebate will be lead by Professor Mark Prictchard (@gastrolivuni), Professor and Head of Department of Gastroenterology and Honorary Consultant Gastroenterologist at the University of Liverpool, on Tuesday 10th February 2015 at 8-9pm GMT and will discuss, ‘Frontline Gastrointestinal NETs: The approach to diagnosis and initial management’. 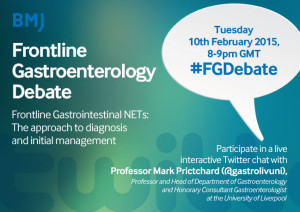 Prof Pritchard studied Medicine at Manchester University (BSc (1st class Hons) in Medical Biochemistry, 1988, MB.ChB (with Hons), 1991). After junior hospital posts (MRCP(UK) 1994), he returned to the University of Manchester to train in Gastroenterology and performed research on the genetic regulation of apoptosis in the GI tract with Profs J. Hickman and C. Potten (Digestive Disorders Foundation and MRC Clinical Training Fellowships leading to PhD, 1999). In 2000 he moved to the University of Liverpool as a clinical lecturer to complete clinical training in Gastroenterology. Following this he was awarded an Advanced Fellowship for Clinicians from the Wellcome Trust (2002-6) to study apoptosis in the stomach. He was awarded the ASNEMGE Rising Star award in 2007 and the Sir Francis Avery Jones Research Medal of the British Society of Gastroenterology in 2008. He was appointed Clinical Senior Lecturer at the University of Liverpool in 2006, Professor in 2009 and Head of the Department of Gastroenterology in 2010. He also heads the Integrated Clinical Academic Training team in Liverpool. He is chair of the Gastroduodenal Section committee of the British Society of Gastroenterology, the book reviews editor for Gut and a member of the editorial boards of three other international GI journals.

His main research focus is studying factors which influence the pathogenesis of gastrointestinal cancers and neuroendocrine tumours and he has published more than 75 papers on these topics. He is an honorary Consultant Gastroenterologist at Royal Liverpool University Hospital where his main clinical role is managing patients with neuroendocrine tumours, especially those associated with hypergastrinaemia, as part of the city’s European Neuroendocrine Tumour Society (ENETS) Centre of Excellence. He recently led the first clinical trial of a gastrin/CCK2 receptor antagonist in patients with gastric NETs.

In advance of the #FGdebate, Prof Pritchard says:

“Neuroendocrine tumours (NETs) are relatively rare, but because they are often associated with a good prognosis, they have a high prevalence. They are said to be more prevalent than stomach and exocrine pancreatic cancers combined. There is often a delay in initial diagnosis as NETs may cause similar symptoms to other more common conditions such as IBS. As many patients present with metastatic disease at the time of diagnosis, management usually requires the involvement of a multidisciplinary team of clinicians. A gastroenterologist is a crucial member of this team, as many NETs occur in the GI tract and pancreas where they are amenable to endoscopic detection, evaluation and removal.

In the #FGdebate we hope to cover the endoscopic evaluation of NETs, particularly how to determine the type of a gastric NET and whether it requires treatment. We will also discuss other tests, particularly how to interpret chromogranin A blood test results and the role of the new highly sensitive and specific PET scans. There have also been several recent advances in NET management, such as clinical trial evidence to support the use of long acting somatostatin analogues to delay disease progression as well as treat the symptoms of carcinoid syndrome, the more widespread use of targeted radionuclide therapies for metastatic NETs and the development of new drugs such as gastrin/CCK-2 receptor antagonists to treat specific tumour types. Finally we hope to consider how easy it is for patients to access specialist NET teams and therefore the various investigations and treatments that may be needed for optimal management”