After the great success of the #FGDebate with Nobel Prize Laureate Professor Barry Marshall and Editor in Chief of GUT, Professor Emad El-Omar , we are delighted to announce our third debate will be lead by Dr Alex Ford (@alex_ford12399), Associate Professor and Honorary Consultant Gastroenterologist on ‘Frontline Neurogastroenterology: Evidence based therapeutics in irritable bowel syndrome’ on 13th January 2015, 8-9pm GMT. 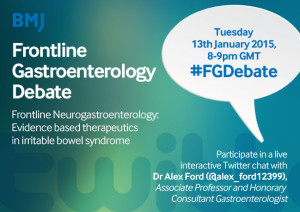 Dr Alex Ford is currently an Associate Professor and Honorary Consultant Gastroenterologist at Leeds General Infirmary, Leeds, UK. During his registrar training he conducted a 2-year period of research funded by the Medical Research Council, obtaining an MD from Leeds University. Work from his thesis was used to inform the National Institute for Health and Clinical Excellence’s guidelines for the management of dyspepsia in the UK. From October 2007 to September 2008 he completed a sabbatical year in the Gastroenterology Division of McMaster University Medical Centre, Hamilton, Ontario, Canada. During this time he conducted a series of systematic reviews and meta-analyses to inform the American College of Gastroenterology’s monograph for the management of irritable bowel syndrome. He updated this work in 2014, and was the first author on the latest version of the monograph published in The American Journal of Gastroenterology in August 2014.

In advance of the #FGDebate, Dr Ford says:

‘Over the last 10 years I have been involved in clinical research into functional gastrointestinal disorders. Gastrointestinal (GI) symptoms are highly prevalent, and possible aetiologies range from the benign to the life-threatening, but functional causes such as irritable bowel syndrome (IBS) are commonest. This condition affects up to 10% to 20% of the general population, and if individuals seek medical advice for these symptoms this group of patients comprises up to one in ten of those referred from primary care to Gastroenterology clinics. Diagnostic symptom-based criteria for IBS exist, and a positive diagnosis is encouraged but, despite this, many individuals undergo investigation to exclude serious underlying pathology, and other management costs are substantial due to consultations and prescribed drugs. Inevitably, excessive expenditure in one disease area, such as this, has implications for the provision of resources in other, equally important, areas of health care. Greater knowledge of the natural history of IBS, why individuals consult with symptoms, whether to perform investigations to exclude potential underlying organic diseases, and which treatments are effective is needed, in order that clinicians can direct scarce resources more efficiently. Our debate will hopefully touch on some of these issues.’

Epigenetics in IBD: a conceptual framework for disease pathogenesis