After the great success of the Hepatology #FGDebate with Professor Sir Ian Gilmore, we are delighted to announce our fourth debate and ‘Christmas Special’ debate will be lead by Nobel Laureate Professor Barry Marshall (@barjammar) and Editor in Chief of GUT (@emadelomar), on Sunday 21st December 2014, at 12 noon GMT and discuss, “Frontline Research: The highs and lows of academic life – the basics, the barriers and the breakthroughs” 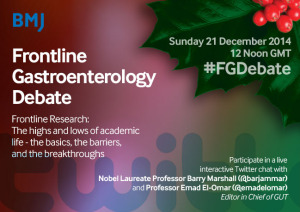 We are delighted that Professor Marshall and Professor Emad El-Omar have agreed to join the #FGDebate:

Professor Barry Marshall is a an honorary Clinical Professor of Medicine and Pharmacology at Sir Charles Gairdner Hospital,  University of Western Australia.  Amongst his many international accolades, in 2005 Professor Marshall and Robin Warren were awarded the Nobel Prize for Physiology or Medicine in recognition of their 1982 discovery that a bacterium, Helicobacter pylori, causes one of the most common and important diseases of mankind, peptic ulcer disease. This discovery was the first step in developing more effective treatments for ulcers and in understanding the causative link between H. pylori and stomach cancer. 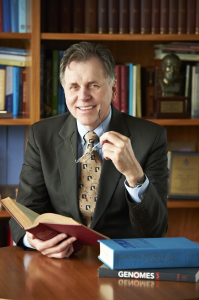 Professor Emad El-Omar graduated with BSc (Hons) and MB ChB from Glasgow University, Scotland, in 1988. He trained in General Internal Medicine and Gastroenterology in Glasgow. In 1995 he was awarded the degree of MD with honours and Bellahouston Medal, for his work on the effect of H. pylori infection on gastric acid secretion in man. In 1997, Professor El-Omar moved to the USA spending 15 months in the Division of Infectious Diseases at Vanderbilt University School of Medicine, Nashville, Tennessee, followed by two years at the Division of Cancer Epidemiology and Genetics, National Cancer Institute, NIH, Maryland. In July 2000, Professor El-Omar took up the newly created Chair of Gastroenterology at Aberdeen University, Scotland. He is also an Honorary Consultant Physician with NHS Grampian. Professor El-Omar is the Deputy Head of Division of Applied Medicine at Aberdeen University. He is the Academic Development Coordinator for the School of Medicine and Dentistry, a role that allows him to mentor a large number of outstanding young clinician scientists and medical students.

He is the Editor in Chief of the journal Gut and sits on the Editorial Boards of several other journals including Gastroenterology. He chaired the Gastroduodenal Section of the British Society of Gastroenterology from 2007-2013 and now sits on the Councils of the BSG and Scottish Society of Gastroenterology. He was elected to the Royal College of Physicians of Edinburgh in 2001, the Association of Physicians of Great Britain and Ireland in 2001 and the Royal Society of Edinburgh in 2007. His main research interests are in the role of microbially-induced inflammation in GI cancer and inflammatory bowel disease. His group has strong collaborations with national groups within the UK and international groups in the US, Europe, Asia and Australia.

‘How do you succeed in clinical academia?? It is a long and tough road but one that is immensely rewarding. The basic personal attributes must of course be present at the outset; these include an inquisitive mind, hunger for knowledge, hard work ethic, tenacity and single mindedness. But none of these matter unless one has opportunities to engage in research. These opportunities can arise by luck (being in the right place at the right time), or arise due to careful and nurturing mentorship. No one should wait for luck to pay a visit; they should seek and make their own luck. As some famous golfers once said “the harder I practice, the luckier I get!”. The more traditional route to success is through mentorship and the role of mentors cannot be over emphasised. Mentors inspire, guide and nurture us and allow us to see the hope and potential within our souls. They offer a paternal shoulder when things are tough and a kick up the proverbial when we slacken off! Through this debate, we hope you will see how true the following proverb is “If at first you don’t succeed, try and try again.” We very much hope you enjoy this debate.’

We look forward to seeing you on the Sunday 21st December at 12 noon GMT.