After the great success of our first ever #FGDebate we are delighted to announce our second debate will be lead by Dr Charlie Lees (@charlie_lees), Consultant Gastroenterologist and IBD Specialist, on 14th OCtober 2014, at 8-9pm GMT and discuss, “‘Frontline IBD: Finding the cause of IBD – genes, bugs or diet?”

Dr Charlie Lees is a consultant gastroenterologist at the Western General Hospital, Edinburgh and honorary senior lecturer at the University of Edinburgh. He trained at University College London and subsequently in Edinburgh, with doctoral studies in the Satsangi lab. 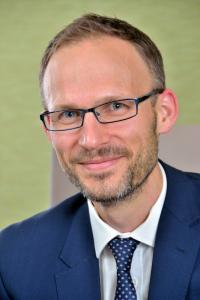 He was awarded the prestigious ASNEMGE (now UEG) European Rising Star in Gastroenterology Award in 2009. His major clinical, research and teaching interest is inflammatory bowel disease. He was a committee member of EduCom at ECCO from 2009-2013, and is presently chairing the SSG IBD Interest Group and sitting on the BSG IBD Research Committee. His major research activities are at the translational interface between basic science and direct clinical application. These include the genetics and pharmacogenetics of IBD (member of Wellcome Trust Case Control Consortium, UKIBDGC and IIBDGC management committee), the role of diet, nutrition and the gut microbiota in disease aetiopathogenesis and prognosis, IBD therapeutics, monitoring and e-health. He is chief investigator of the UK-arm of the important GEM study (www.gemproject.ca), a $20m cohort study investigating the underlying cause of Crohn’s disease, and also of the pan-UK PREdiCCt study (launching 2015). Major international teaching activities include directing the ECCO Advanced IBD Course, the ECCO-CIMF Chinese Masterclass in IBD, the United European Gastroenterology (UEG) Summer School and Young Investigators Programme, and the Wellcome Trust Advanced Course in Genomic Medicine for Clinicians.

In advance of that #FGDebate, Dr Lees says:

‘The inflammatory bowel diseases, Crohn’s disease and ulcerative colitis, are common in the Western world affecting about 1 in 200 individuals. In recent years incidence has increased dramatically in developing countries in parallel with the adoption of a Western lifestyle. Whilst the precise aetiology of IBD remains illusive the currently held paradigm is of dysregulated immune responses to commensal gut bacteria in genetically susceptible individuals. Gene discovery in IBD has seen unparalleled success in complex diseases. Nearly 200 disease genes have been identified. These findings have started to yield fruit with important insights into disease biology. However they also demonstrate the underlying complexity of disease pathogenesis. Furthermore, they only appear to explain around one quarter of phenotypic variance – ie why an individual develops disease. Much attention has now start to focus on the role of the gut microbiota in IBD. There is clearly reduced microbial diversity in IBD patients, but it remains unknown which critical aspects of the observed dysbiosis are potentially causal or simply the effect of underlying inflammation. Moreover, the interplay between environmental factors, notably antibiotic exposure and habitual diet, underlying genetic variation and the gut microbiota are only just starting to be explored. 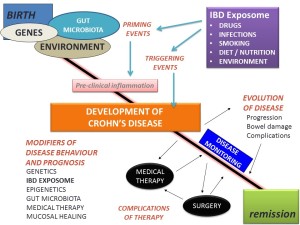 In this Frontline Gastroenterology twitter debate we will explore these issues and discuss how present data, planned and future studies can / should address this critical question. How will we find out what causes IBD to develop? Will this knowledge help us prevent the disease from developing in high-risk individuals? Are the environmental triggers for disease onset the same as those for disease flare in patients with established disease? Will these findings bring us closer to a ‘cure’ or at least prolonged remission in those with established disease?

Join us on Tuesday 14th October to tackle these important issues and bring other questions and ideas to the discussion.’