This week’s Blog is written by Michelle Munt (@michelle_munt). 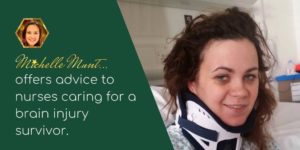 Nurses up and down the country are the backbone to society. You help us recovery from an extraordinary range of conditions and injuries, including some extremely complicated ones. Brain injury has to be amongst the most challenging due to the spectrum of effects it can cause. I’m not medically trained so I’m not going to tell you how to do your job, but I want to help you understand what it’s like from the brain injured patients’ point of view.

I don’t remember that much from my time in hospital, but what does stand out to me was how jovial I was at times. Now I don’t know if I was on very powerful pain killers which could have altered my mood (I don’t think I was as I haven’t seen anything mentioned in my medical notes) but I would suggest that this type of response needs to be looked at carefully. Once I understood that my work knew I was in the hospital I was just relieved that they wouldn’t be hounding me to do any pressing projects. In the UK we often push ourselves very hard when it comes to work and feel guilty on the few occasions that we call in sick. So, whilst many will be able to relate to my feelings of relief, this shouldn’t have been my priority. It shows how my brain wasn’t able to grasp what had really happened and what I was facing. Therefore, whilst this usually would be seen as a positive, I would suggest that it proves that the brain injury patient needs to be closely monitored.

I’m sure that in some ways I appeared able to understand some things. But just because I understood when I was told, it rarely stayed in my memory long enough. For example, I had a catheter and an enema when I was on a small ward with one bathroom. I decided I needed to use the toilet and dragged all this equipment (which wasn’t on wheels) over to the bathroom. I could barely walk so I was using the stands to stabilise myself and I’m sure it took me ages to reach my intended destination. The door was locked as someone was already using it and eventually someone convinced me to return to bed. My exhausting journey had been in vain because I’d forgotten, or failed to understand that the devices that I was attached to meant I didn’t need to use the toilet. Thankfully I didn’t cause myself any damage, but that was probably just lady luck deciding that I needed a break. Therefore, I would suggest that it would be vigilant to constantly check that your brain injured patient understands what is happening as every opportunity. I appreciate that you have a lot of people to look after and there never seems to be enough time in a day, but just be aware that even the “obvious” can be lost on the people who just minutes earlier seemed like they could Einstein a run for his money.

As with most patients’ brain injury survivors are keen to get home as soon as possible. Particularly high functioning survivors, like myself, will do whatever it takes to get home. That includes lying, and trying to find a way to cheat the system. We just want our privacy back but don’t understand how getting home isn’t necessarily the best course of action for us. I had to do a test to prove I could cope at home by making tea for my assessor, my partner and myself. I failed to turn the kettle on without help, and then put milk in the assessor’s tea then she asked for black. But the weirdest part was the way I transferred the blame for my error to her by saying “no one has black tea”. This was because I was desperate to get home and I didn’t want her to stop me because of what I considered a minor lapse. Don’t be fooled by this type of deflection tactic. I was surprised by how I had messed up and didn’t feel competent, but I wasn’t about to say that. Thus, I managed to go home after just 10 days. I now accept that I should’ve been more honest because I wasn’t ready, but I lacked the insight to understand that.

I know it’s difficult when you didn’t meet the person before their injury and therefore can’t see the difference it has caused. Just remember we are vulnerable people but we are still fighting for control because we haven’t accepted what has happened to us. We know we are as intelligent as we were before, but we don’t appreciate that our brain is struggling to apply that in the way that it did before. That means we think we’re clever and right, but all too often we have got it wrong. We might not realise it, but we need you to guide us and take charge.