When I started practicing as a primary health care nurse practitioner in 2000, I had no idea of what was to come.  Throughout my program I learned all about the recommended vaccine schedule, the components of each vaccine and the devastating illnesses that we were protecting people from, especially children.  Since the introduction of immunizations, hospitalizations and death of children from diseases such as diphtheria, polio, pertussis and measles has virtually been eliminated https://bit.ly/2E1YFEj  My parents told me of their experiences with the intense fear that spread through communities when there was an outbreak of polio and I took on three patients in my practice with partial paralysis and post-polio syndrome.  I recall a child and, separately a few years later, an adult in my community who died from epiglottitis. I, myself have a male family member who is sterile as a result of the mumps. I also have a friend from grade school who is deaf in one ear as a result of complications from measles, a much lesser fate than children who died from this disease.  One of my cousins tore his extraocular eye muscles from coughing related to pertussis. Given all of this, I was literally shocked when a few families in my newly formed practice made the decision not to immunize their children. 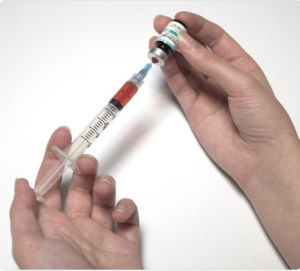 The catalyst for much of the modern anti-vaxxer movement was the publication of an article by Andrew Wakefield.  Around the time that I started practicing, Wakefield was using this study as the foundation of his fight against the MMR vaccine, claiming it ’caused’ autism.  I wonder if parents understand that the research in question was conducted on only 12 children.  The research question leading it was not related to autism and the conclusions made were from anecdotal evidence (chart audit and parental interviews). In addition, at the time the article was printed, Wakefield had been involved in a lawsuit against the MMR vaccine manufacturers, along with the parents in his study https://bit.ly/2kpENhN  No well-conducted research has ever supported the claim that the MMR vaccine causes autism. Regardless, we are all aware that his theory took hold and the era of anti-vaxxers began.

The result has been moving from almost 100% MMR immunization rates to as low as 80% in the UK in 2003/2004 and similar results in areas around the globe https://bit.ly/2BrrNTC.  This has been followed by outbreaks of red measles. Measles has now infected many thousands of children and, in 2017, killed 110,000 people worldwide, mostly children under the age of 5 https://bit.ly/2rN0iyE. It seems that every few days, we’re learning of an upsurge of measles.  For the first time, the WHO put anti-vaccination as a top 10 health threat for 2019 https://bit.ly/2VRA77A.

Here’s the thing.  The MMR doesn’t only protect against measles (red measles).  It also protects against Mumps and Rubella.  Although much less of a population, public health threat Mumps are very painful, inconvenient and have as a complication, orchitis (infection of testicle).  This is how my family member, and many other young men, became sterile.

Rubella, or German measles isn’t a terrible illness and most people recover without complication.  That is, if they aren’t pregnant women. The primary reason to immunize against Rubella is to prevent pregnant women from contracting this disease, because of the devastating effects on the unborn child https://bit.ly/2RORpiE.

It’s been about 20 years since the anti-vaxxer movement took hold. Measles outbreaks have been reported almost since this time.  However, we’re now starting to hear of outbreaks of mumps https://bit.ly/2TIFxAj.  The oldest of the female children whose parents were caught up in the anti-vaxxer craze have reached childbearing age.  The thought of this sends shivers through me, and even more so because, for the most part, the healthcare providers in training today have never seen, or experienced any of these diseases.

I think of all the information available to families about the effectiveness and safety of immunizations as well as all the counselling I, myself, have provided to patients.  Parents still refuse to immunize their children.  I understand that parents are fearful and no one wants to harm their child. However, it’s exhausting to fight for immunizations, against the tide of popular opinion and social media.  We’ve endured a renewed threat of measles.  Now we need to brace ourselves for the threat of Mumps and Rubella…and, what else?  As a health care provider, this isn’t a good feeling and it’s sad that the most successful public health initiative ever, in human existence, is under attack.  I don’t know what the solution is, but I do have a vision of the outcome.