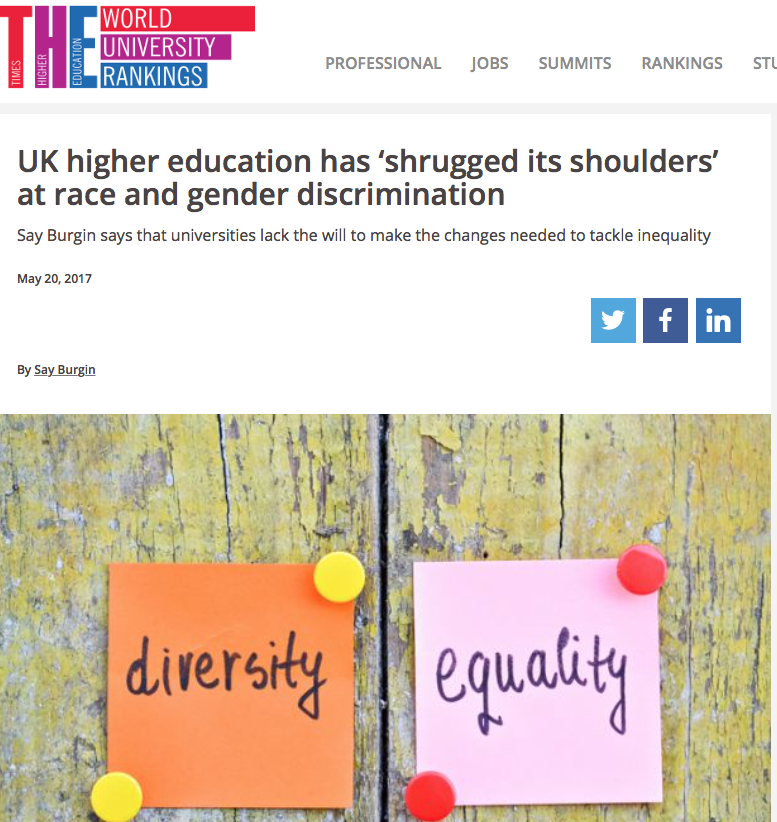 highlighted how both racial and gender discrimination remain rife within higher education and refers to the persistent and deeply embedded lack of will at managerial level for any real and meaningful change. Why?   “Because what an absence of will comes down to is a fierce protective impulse for a status quo that benefits those who are already in power – in universities or anywhere else”. How true this is. And even more shocking is the extent that those in power will employ what appears as non-discriminatory terminology and policy to further enforce the position of white male privilege in academia. Figures show that the institutions gave their bosses above-average pay increases of up to 13 per cent in 2015-16.

One such example is that of a post 1992 university in the Greater London area, which proudly promotes itself as being one of the “most diverse” institutions, promising students the experience of belonging to a “global family”. Really? Scratch away the glossy veneer of inclusive language to reveal what lies beneath. A corporate plan that boasts a remit of 28,000 students from a 120 countries worldwide. Impressive? Certainly, especially considering the financial bounty attached to those recruitment figures. Yet….93% of those students are from the UK, with 52% from the immediate locality. Somehow these figures appear to have been” lost in translation” – how is this indicative of a global student body? Or how does this illustrate a cohort – again to quote their corporate jargon – as being “extraordinarily diverse”.

Ah yes, extraordinary in academia – where the student population in this university – apparently “renowned” for its widening participation remit – is mainly black and female. NOT white, not male and therefore NOT one that comes with all the inherent and implied advantage attached to one gender and one race. This is particularly evident in the Faculty of Health where susceptible mature students are attracted to programmes with a recruitment policy that appears to value both work and life experiences as much as prior academic achievement. Many students already work in the field of health and social care and hope that a degree will further their careers in one way or another.

Yet the inference of “widening participation” – rather than offering such students any real opportunity – is far more about meeting recruitment numbers in order to maintain economic buoyancy. Accepting students who are less confident about their educational ability , less prepared for academic study, – fulfils the requirements of an institutionalised managerial hierarchy – one where white, educated men dominate. Where such an established power structure exists, the student body are easy to manipulate – rather they are made to feel fortunate and grateful to have been allowed access to higher education. Flaunting this as a ‘gift” of opportunity, allows privilege to prosper. And the gap between those in senior management and their student customers– is not that marked by race and ethnicity in itself – but more by the accompanying covert advantage.

So for those students who are initially impressed by undergraduate programmes that appear to value maturity and experience, that welcome diversity, that embrace inclusivity…….should look beyond the executive bluster of self-publicity to the realities of the student experience and graduate prospects. Students should weigh up the cost of a degree pathway at such universities – It may be that a discourse that reflects exploitation, inequity and inequality would be more appropriate considering the underlying truths of current higher education strategy. Buyer Beware.