Joining together for COINN 2016 is a wonderful opportunity to reflect on how far we’ve come – and where we still need to do better – in preventing and treating neonatal pain. As I think about the role of parents as partners in neonatal pain management, we seem to be on a 15 year cycle of paradigm shifts in our thinking.

It wasn’t until the mid-1980s that neonatal pain was first recognized as a serious health condition, and parents played an important role in bringing public attention to the untreated pain of infants in neonatal intensive care units. Then, in the early 2000’s we started asking parents about their views on how we were managing infant pain and, guess what? – they had many questions, worried about how not being able to comfort their baby meant that they weren’t able to be a good parent, and parents wanted to be more involved, but didn’t know how.

This realization began a very fruitful era of research where we all discovered that parents were our best “medicine” for preventing or treating much of the day-to-day pain that infants experienced. We learned it was safe and effective – often more safe and effective than traditional analgesics. We also discovered that nurses were more attentive to infant pain assessment and management when parents were more actively involved. Involving parents in infant’s comfort care is a classic “win-win” example – reducing a serious adverse outcome of neonatal intensive care for infants, and promoting confidence and competence of new parents. 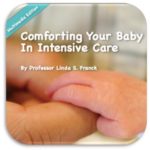 And now in 2016, it is time to take the next big leap in knowledge and action to continue to improve infant pain prevention and manage. Let’s include parents as full partners from the very beginning of this next idea generation. I can’t wait to see what great new innovations our nurse-parent partnership will discover together!!