We are delighted to introduce Carole Beighton, EBN’s guest blogger this week.  Carole Beighton is a multi-professional facilitator teaching at St Georges NHS Trust.  She is an RGN and an RNLD and a part time doctoral research student from the School of Health and Social Care at London South Bank University.  She is the parent of an adult child who has intellectual disabilities and this inspired her to undertake her PhD which is entitled: Understanding the relationship between parents who identify ‘positive aspects’ of parenting their child who has intellectual disabilities and the parents self-reported health and wellbeing. 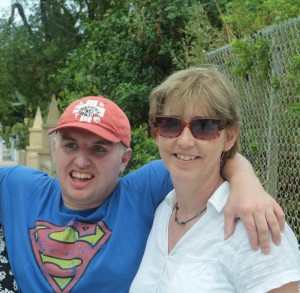 Are parents really identifying positive aspects of parenting their child with intellectual disabilities or are they just coping?

The majority of literature around parenting a child/adult child with intellectual disabilities (ID) focuses on the child as the ‘negative stressor’ and the negative impact or burden the child will have on the parent or family over their lifespan.  This includes experiencing higher levels of psychological distress and/or depressive symptoms and poorer general health than parents of typically developing children.  Although the stress of parenting a child with ID is undeniable, this represents only one dimension and in addition to acknowledging the stress they experience, some parents also report the ‘positive aspects’ that the child has brought to the parent or the family.

These positives can refer to actual changes that they have undergone or perceptions of change and have been consistently described as giving parents a greater appreciation of life (especially for the small things in life), increased spirituality, increased personal strength and confidence, becoming a better person (more compassionate, less selfish, more tolerant), changed their priorities in life, becoming less materialistic and building more meaningful relationships (Hastings & Taunt 2002).

It has been posited however, that the changes that parents are identifying are not really ‘positive’ aspects of parenting their child per se, but that they are actually describing adaptive coping mechanisms, namely cognitive reframing strategies which help them to adapt or cope successfully with the stressful experiences of raising their child.  Positive reframing is a form of meaning-based coping in which the significance of the event is reinterpreted in a more positive way and reframing has been found to be a significant independent predictor of positive perceptions in mothers of children with an ID (Hastings et al 2002).

These positive appraisals are seen as important in helping parents sustain efforts, such as those associated with caregiving over long periods of time and have been found to play a protective role in psychological wellbeing (Folkman and Moskowitz 2000). Although not yet demonstrated in parents of children with ID, studies of carers supporting older people have reported that those who appraised their caregiving experience more positively have shown better psychological wellbeing across time and are less likely to report burden, depression or poor health (Hilgeman et al 2007). Cohen et al (2002:188) express concerns for carers of older people who are unable to identify any positive aspects of caring and conclude; “carers who cannot identify anything positive about caring may be at particular risk for depression and poor health outcomes in addition to institutionalizing the cared for earlier than others.”

Although it is acknowledged that the relationship between parents who identify positive aspects and them reporting increased mental wellbeing over their counterparts may be over simplistic as stress and coping can also be influenced by interpersonal processes, understanding this relationship is important as supporting all carers to achieve better psychological well-being has been set as a priority by National and local Governments in the UK.  Parents who support their children with ID are known to spend the longest time as carers with most providing lifelong support for their child. It is important to ensure that their general health and mental wellbeing is optimised to enable them to continue in this role.

It could be hypothesised that parents who are not able to identify any positive aspects may not have developed adaptive coping strategies or are perhaps using maladaptive strategies and may benefit from receiving more professional support or therapeutic interventions. These include cognitive behavioural therapy (CBT) techniques to reinforce behaviours which promote well-being and also develop their coping strategies, problem-solving skills and stress management techniques. They could also be encouraged to engage with support groups (online/face to face) or forums as these have been shown to increase mental wellbeing in other carer groups.