This week has been one of the biggest in dementia care with 2 important conferences taking place. On Tuesday evening Professor June Andrews hosted our #ebnjc tweet-chat live from the International Dementia Conference in Birmingham and this Thursday our associate editor Gary Mitchell and alumni blogger Joanne Agnelli will co-host a second tweet-chat on dementia with the Nursing Standard (05.11.2015 at 12:30pm – 1:30pm – use #NSComment to join).

Today we have the pleasure of bringing you a special guest blog from one of the conference chairs from the International Dementia Conference, Joanne Strain, Head of Nursing Care Standards & Quality, Four Seasons Health Care.

In today’s blog Joanne, who is also undertaking an MA at Keele University on Safeguarding adults, blogs about restraint in dementia care.

Fortunately dementia care has evolved over the last number of years but there are still a number of aspects which require attention. In today’s blog I would like to provide readers with an overview of restraint in dementia care.  Firstly, restraint is more than just restricting the movement of a person; it is also about restricting a person’s liberty.  It is probably perceived by many that intentionally restricting a person’s voluntary movement or behaviour is unethical but in some cases it may be necessary practice in order to maintain the safety of people in our care.  That being said, restraint is something that should only ever be used as a last resort.

There are many types of restraint and many nurses and other healthcare professionals may not even be aware they are restraining individuals.

Physical restraint is when a person is held or blocked from moving from a certain location. This may be necessary if a person living with dementia is recovering from a fracture and is trying to mobilise but it is not a means that should ever be employed to, for example, stop a person from freely walking around.

Technological surveillance is an emerging form of restraint that is often in the press. This pertains to tagging people living with dementia or monitoring their movements on closed circuit cameras.  The rationale for these kinds of interventions is usually to encourage the person to be as independent as possible in their environments (while they are monitored from afar).

A form of restraint that many people often do not know about is termed psychological restraint and this is constantly telling someone that they are not allowed to do something or what they are doing is too dangerous. The reason this is restraint is because the recurring behaviour can put the person off doing what it is they want to.

Importantly restraint may be justified in some circumstances in dementia care, usually when a person is putting themselves or others at risk. BUT restraining people living with dementia is usually something we should never do and certainly not without input from a multidisciplinary team of experts, the family and care partners of the individual.  If you are to take one thing from this blog it should be that restraint is the last resort.  (Picture: Joanne Strain on right presenting at Alzheimer Disease International Conference in Perth, Australia in April 2015.  On left EBN Alumni blogger Joanne Agnelli). 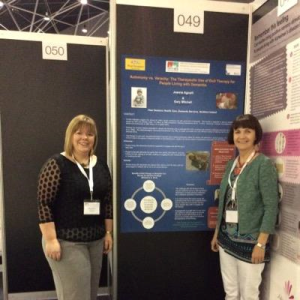 Check out EBN’s own top 5 recommended resources on dementia below: