EBN are excited to share Joanne Agnelli’s latest blog which focuses on the appropriate use of language in dementia care.

Joanne @JoanneAgnelli is a dementia services quality manager from Four Seasons Health Care.  This year she has presented her work at the Alzheimer’s Disease International Conference (Perth, Australia), The Alzheimer’s Show (London, England) and is due to present at the Healthcare Interdisciplinary Research Conference (Dublin, Ireland) later this year.  Joanne’s contribution to nursing was recently recognised at Northern Ireland’s RCN ‘Nurse of the Year’ Awards where she was runner-up in the Team Leader category. 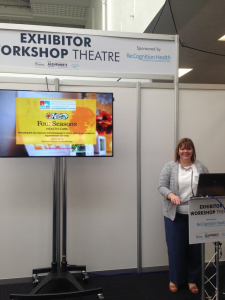 When I qualified as Registered Nurse in 1997, I had no concept of what it meant to live well with dementia or the negative connotation that language had on impacting on the stigmatisation of the disease.

In 2005, I took up the post of Home Manager of a Nursing Home which had an ‘EMI’ unit (Elderly Mentally Infirmed). The term EMI did not sit comfortably with me, however it was widely used by both NHS staff and care home staff. Other terms commonly used were ‘feeder’, ‘wanderer’, ‘aggressive’, ‘challenging’ and ‘sufferer’, to name but a few. While I am not proud to admit that I also used these terms, it is also important to note, that I had not received any formal dementia training and was therefore oblivious that the language I used every-day continued to further the stigmatisation of people with dementia.

The home embarked on a project to enhance the quality of lives of people living with dementia. Through this I had the opportunity to attend person centred care training and Dementia Care Mapping training. The training was invaluable as this challenged not just my practise but also that of the staff team. We had been exposed to the work of Tom Kitwood, Christine Bryden and Dawn Brooker and the ethos of person centred care. This included treating people living with dementia as unique individuals and moving away from a medical model of care towards a bio-psycho-social model. As a staff team the changes that we implemented were small and at the time on reflection we couldn’t understand why we hadn’t thought of these earlier, such as visible life story work, doll & animal assisted therapy, medication reviews and positive risk assessment.

In 2014 the DEEP (The Dementia Engagement and Empowerment Project) guidelines on language about dementia were published. These guidelines were written by 20 people living with dementia who came together for a day in Liverpool. Alzheimer’s Australia (2014) also devised Guidelines of words to avoid

The words and descriptions that were identified by this group should never be used to when describing dementia or people with dementia, they are considered as ‘curl up and die words’. These included ‘dementia sufferer’, ‘senile’, ‘burden’, ‘victim’, ‘wanderer’, aggressive’. Despite this guidance the media continues to portray a negative image of dementia which devalues the contribution to society that a person with dementia continues to make.

I recently attended the Alzheimer’s Disease International conference in Perth, Australia to present on ‘Promoting the use of person centred language in clinical practise and society’. The take home message from this conference was the inspiring voices of those people living with dementia, the simple statement….

“no longer about us, without us”