Our next live Google Hangout will be on Friday 10th April, 2pm BST! The Evidence-Based Mental Health experts will be discussing whether lithium is really the best drug for long term treatment in bipolar disorder. 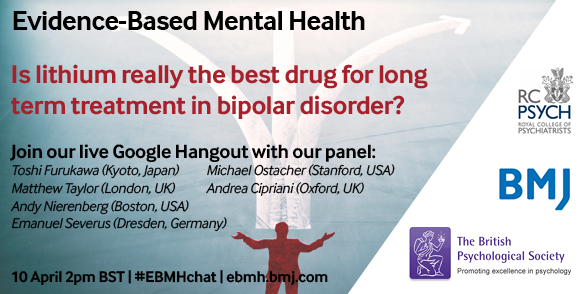 The EBMH commentary by Charles Bowden will be freely available as soon as it is published online first. (We will post the link soon.)

In many clinical guidelines, lithium is considered the established standard in the long-term treatment of bipolar disorder, but several new drugs have been assessed for this indication. In a recent systematic review and network meta-analysis published in the Lancet Psychiatry in 2014, Miura and colleagues investigated the comparative efficacy and tolerability of available pharmacological treatment strategies for bipolar disorder. They searched Embase, Medline, PreMedline, PsycINFO, and the Cochrane Central Register of Controlled Trials for randomised controlled trials (until June 2013), that compared active treatments for bipolar disorder (or placebo), either as monotherapy or as add-on treatment, for at least 12 weeks. The primary outcomes were the number of participants with recurrence of any mood episode, and the number of participants who discontinued the trial because of adverse events. The authors assessed effiacy and tolerability of bipolar treatments using a random-effects network meta-analysis within a Bayesian framework. 114 potentially eligible studies were found and 33 randomised controlled trials published between 1970 and 2012, that examined 17 treatments for bipolar disorder (or placebo) in 6846 participants were identified.

Participants assigned to all assessed treatments had a significantly lower risk of any mood relapse or recurrence compared with placebo, except for those assigned to aripiprazole (risk ratio [RR] 0.62, 95% credible interval [CrI] 0.38–1.03), carbamazepine (RR 0.68, 0.44–1.06), imipramine (RR 0.95, 0.66–1.36), and paliperidone (RR 0.84, 0.56–1.24). With respect to the secondary outcomes of prophylactic efficacy, only quetiapine and lithium prevented relapse or recurrence of both polarities of the mood episode, compared with placebo. Lamotrigine and placebo were significantly better tolerated than carbamazepine (lamotrigine, RR 5.24, 1.07–26.32; placebo, RR 3.60, 1.04–12.94), lithium (RR 3.76, 1.13–12.66; RR 2.58, 1.33–5.39), or lithium plus valproate (RR 5.95, 1.02–33.33; RR 4.09, 1.01–16.96). Interestingly, the authors noted considerable differences in design features of the included trials. Lithium was the dominant node in the evidence network, and the evidence for lithium was well balanced in terms of mood states at recruitment, with small (or possibly null) contributions from enrichment design trials (despite its discovery about 60 years ago, most evidence about lithium has been produced in the past 15 years and lithium has often been the reference drug in registration studies about second-generation antipsychotics, ruling out the potential for sponsorship bias). In quetiapine and lamotrigine studies, the participants were more balanced in terms of mood states at study entry than were participants in olanzapine trials, but they were enriched; in olanzapine trials only participants with an acute or recent manic or mixed episode were recruited, but they were more balanced in terms of enrichment than were quetiapine and lamotrigine trials. In risperidone longacting injection and fluoxetine studies, participants with specific polarity were recruited and only those responding to the investigational drug were eligible. Olanzapine, lithium plus valproate, and risperidone longacting injection seemed to be more prophylactic for manic episodes than for depressive episodes, whereas lamotrigine might be more prophylactic for depressive episodes. These drugs could be a second choice for a patient who has a specific dominant polarity. The quality of evidence for any mood episode relapse or recurrence was rated as moderate for lithium and olanzapine, very low for lithium plus imipramine, and low for all the others.

Although most of the drugs analysed were more efficacious than placebo and generally well tolerated, differences in the quality of evidence and the side-effect profiles should be taken into consideration by clinicians and patients. In view of the efficacy in prevention of both manic episode and depressive episode relapse or recurrence and the better quality of the supporting evidence, lithium should remain the first-line treatment when prescribing a relapse-prevention drug in patients with bipolar disorder, notwithstanding its tolerability profile.

If you can’t join us on the 10th April, don’t worry the hangout will be available to watch back on YouTube.

Caesarean section and its relationship to offspring general cognitive ability: a registry-based cohort study of half a million young male adults

Metformin in the management of antipsychotic-induced weight gain in adults with psychosis: development of the first evidence-based guideline using GRADE methodology