Who hereabouts makes all the people die,

And with his spear he dove his heart in two

And went his way and made no more ado.

He’s slain a thousand with this pestilence;

And, master, ere you come in his presence,

It seems to me to be right necessary

To be forewarned of such an adversary:

Be ready to meet him for evermore.

My mother taught me this, I say no more.’

from The Pardoner’s Tale

in The Cantebury Tales by Geoffrey Chaucer, 1483

Throughout our history, punctured by warfare and natural disasters, nothing has killed more humans tha 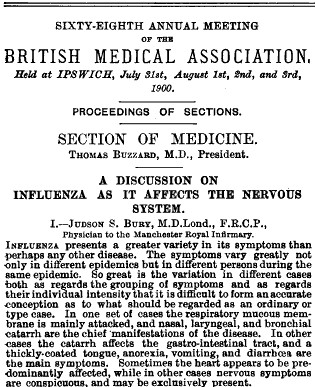 n infectious diseases. Despite countermeasures of vaccines and antibiotics undoubtedly propelling us into a modern world, Covid-19(SARS-CoV-2) is an unwelcome reminder of how vulnerable we remain. Although neurological disorders are not commonly associated with such respiratory viruses, it is not a new phenomenon: in 1944 William Osler noted that “almost every form of disease of the nervous system may follow influenza”[1] while the SARS (SARS-CoV-1) epidemic of 2002 saw the presentation of peripheral and central nerve syndromes and provided pathological evidence of widespread vasculitis [2]. The current Covid-19 pandemic seems to be no exception, with the neurotropic possibility of this distinct virus now emerging in the literature, as discussed in this month’s edition of JNNP [3, 4].

Historically, neurological and psychiatric sequalae can be observed from descriptive accounts of almost every respiratory pandemic. During the 1918 influenza (H1N1) pandemic, President Woodrow Wilson, the 28th President of the United States, developed the respiratory illness during post-WWI peac 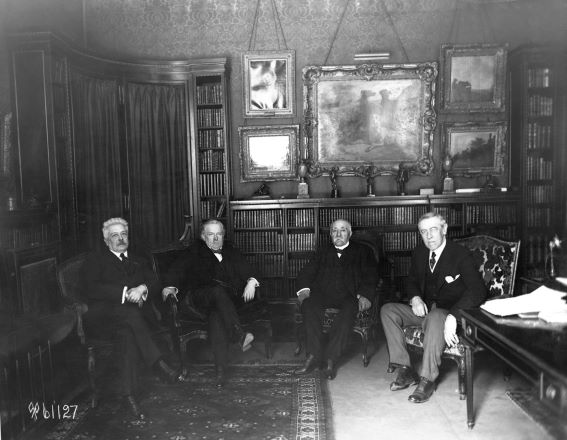 e treaty discussions in Paris. His Chief Usher wrote that “something queer was also happening in his mind”, while house aides commented on his increasing paranoia of being surrounded by French Spies and his fluctuating lethargy. He subsequently suffered a severe stroke some months later. Infamously, this illness effect changed his previously irresolute opinions regarding the treaty discussions, ultimately serving as a Pyrrhic victory that resulted in the Treaty of Versailles, a provocative incentive towards revived German nationalism in the 1920s-30s. The account from his secretary Gilbert Close also suggested that such “nervous symptoms” were not transient, noting “one thing is certain: he was never the same (man) after this little spell of sickness.” For others during this time, their flu illness was rapidly followed by an epidemic of encephalitis lethargica. Although no definitive evidence of direct causality from H1N1 was determined for these neurological maladies, the theory of common cause continues to be plausibly debated by neurologists and epidemiologists alike.

Figure: Vittorio Orlando, David Lloyd George, Georges Clemenceau, and Woodrow Wilson meet to discuss the Treaty of Versailles, during which Wilson became ill with the 1918 flu.

Early literature has now begun to identify the neurological manifestations of the current Covid-19 pandemic. As discussed by Liu K, Manji H and colleagues [3-4], the recent retrospective case series of 214 patients with Covid-19 infection from Wuhan, China, reported neurological symptoms occurring in ~ one third of the group (36.4%), predominantly affecting those with more severe respiratory disease [5]. As for SARS, the virus exploits the angiotensin-converting enzyme 2 (ACE2) to gain entry into the cell. This receptor is also reported to be expressed on neurons, glial cells, and vascular endothelial cells [5]; as such, the occurrence of primary neurological symptoms with Covid-19 infection is a reasonable theoretical proposition. A small number of pathological specimens have also crucially reported viral infiltration of the brainstem, supporting its neuroinvasive potential and expanding the aetiologic possibility that respiratory failure may have a neurological contribution [6]. The severity of the neurological manifestation paralleled the severity of the respiratory illness, with more malignant symptoms (e.g. stroke, seizures, encephalopathy) often occurring later in disease. Stroke (ischaemic and haemorrhagic) was reported in 3%, but the high-risk premorbid cardiovascular profile of many of these patients as well as the secondary blood pressure and coagulation abnormalities identified in Covid-19 suggest that such presentations may increase. Patients with mild respiratory illness displayed less malignant neurological complaints (e.g. headache, neuralgia, hyposmia, hypogeusia) and often presented early, sometimes even prior to respiratory symptoms developing.

This earliest literature and surrounding discussion provide an important glimpse into a potential spectrum of neurological manifestations that may emerge during and after the current pandemic. Such information should also serve as a herald to consider Covid-19 infection when seeing patients with new-onset neurologic symptoms, in the months that now follow. Better understanding of the true neurovirulence of SARS-CoV-2 will be essential in order to differentiate the secondary effects of critical illness from primary neurological syndromes, and will remain fundamental to delivering best practice for these patients. Until that time however, neurologists should prepare to see both peripheral and central neurological syndromes as Covid-19 unfolds, the nature of which may well place them at the frontline of the current pandemic.