In a bid to control COVID-19, India is in the midst of a 21- day lockdown. It is increasingly becoming clear that COVID-19 cannot be solved in a 21-day race. The big question on everyone’s mind is how, when, and in what form COVID-19 will end?

Successful containment comprises tracking the disease transmission within a community through active surveillance, extensive testing, isolation of COVID-19 cases, further contact tracing, and quarantine. The lockdown measures (mitigation) aimed to slow the rate at which further spread of the virus occurs and reduces the anticipated surge while expanding the testing and treatment capabilities. The Government of India has taken a significant step to build the capacity of more tests. So far, India has conducted 47 tests per million of the population, which is low compared to that of other countries. In contrast, the UK  has tested 2,753, USA, 4572, South Korea, 8800,  Australia, 11291, and UAE, 22,918 tests million. As of 1st  April, the UK has tested 348 per 100,000 of the population, Italy 895 per 100,000, South Korea 842 per 100,000, USA 348 per 100,000, and 27 per 100,000 for Japan. In terms of volume, France conducts  10,000 tests per week, UK 16,000, US 26,000, Germany 42,000, Italy 52,000, and South Korea 80,000 tests. In comparison, it is essential to have a closer look at the sub-national data instead of cumulative national data to assess how well the COVID-19 containment measures are implemented.

How are the states performing in containing?

Based on the available data in the public domain, we found the Indian states can be divided in four categories. Based on the testing rates and case fatality, we categorised (Table-1) the states which tested more than 38 tests per million (Median value of the tests conducted across all states of India) as good testing. Further, states with case fatality rate (CFR) higher than 2.3% (India’s National Average Case fatality) was considered as state with high CFR.

We used the population projections for India and States for 2020 from the 2011 Census and the current number of confirmed COVID-19 cases, deaths and tests to derive the cases per million, tests per million, and Case fatality proportion for the population. The number of tests conducted was sourced from the State’s Health Department Website as on 5th April, many states did not have the data updated on their websites, and the information was sought from Media Bulletin and press articles. 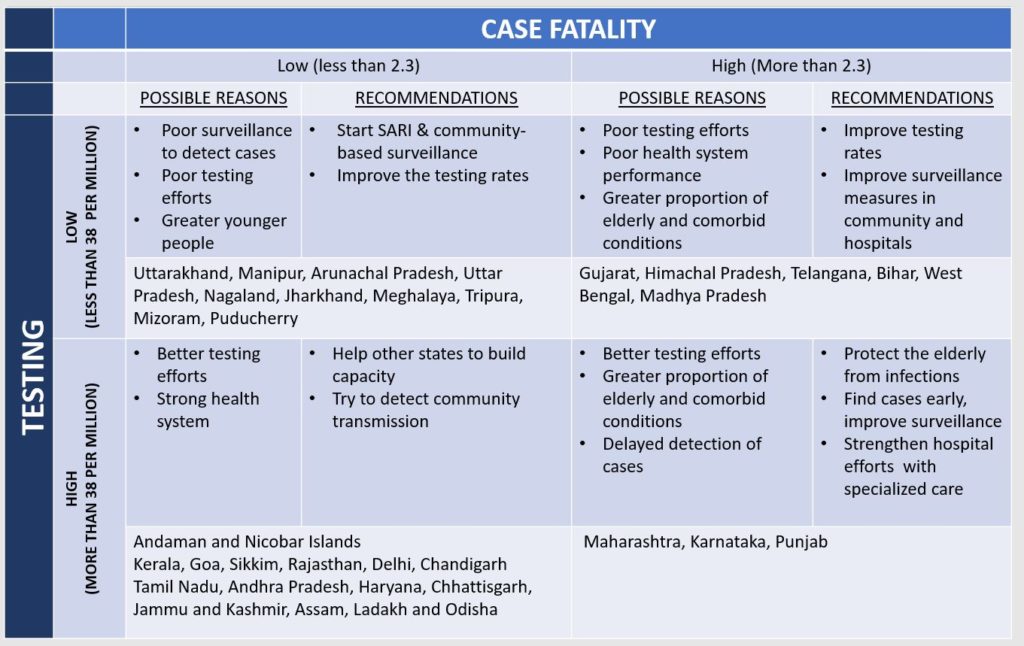 Within India, Kerala, which reported the first case in India on January 30, 2020, has the highest testing rate of 276 tests per million population and has one of the least case fatality of 0. 65%. In contrast, Madhya Pradesh, Bihar, Punjab, West Bengal, and Gujarat have higher case fatality proportion (3to 9%) compared to the national average (2.3%). These states might have missed detecting cases in early-stage, delayed hospitalization, or higher proportion of elderly or with comorbidities might be getting infected and detected late or do not have adequate specialized hospital care.  With less than 15 tests per million population and proportion of the positive cases of total tests is less than 2%, the states of West Bengal, Jharkhand, Uttar Pradesh, and Madhya Pradesh are probably missing cases.  Other states such as Bihar, Manipur, Telangana, Himachal Pradesh, Uttarakhand, Gujarat, Odisha are doing less than 40 tests per million population; these states need to increase the number of tests by improving surveillance. As of now, best performing states are Kerala,  Goa, Rajasthan, Delhi, and Chandigarh, which are doing a significant number of tests and are detecting a higher number of cases.

In summary, containment measures need to be improved in all states by increasing the number of tests. Also, syndromic surveillance and symptomatic quarantine measures are useful strategies to improve containment measures. States which have inadequate testing, poor early detection efforts, and higher case fatality will pose greater challenges in the future. If the cases are not detected early, then those who develop complications cannot be referred timely and, therefore, can succumb. Also, the planning efforts will get impeded as there is no data to inform on the disease trends in the state.

It is more than two months since the first observed COVID19 case was diagnosed in India. We still have minimal data to understand the epidemiological trajectory of COVID 19 in India. The biggest limitation for our analysis is that state-wise testing, detection, and case-specific details are not made available in the public domain.  We urge  that data should be made publicly available so that researchers can analyse and inform the policy actions. 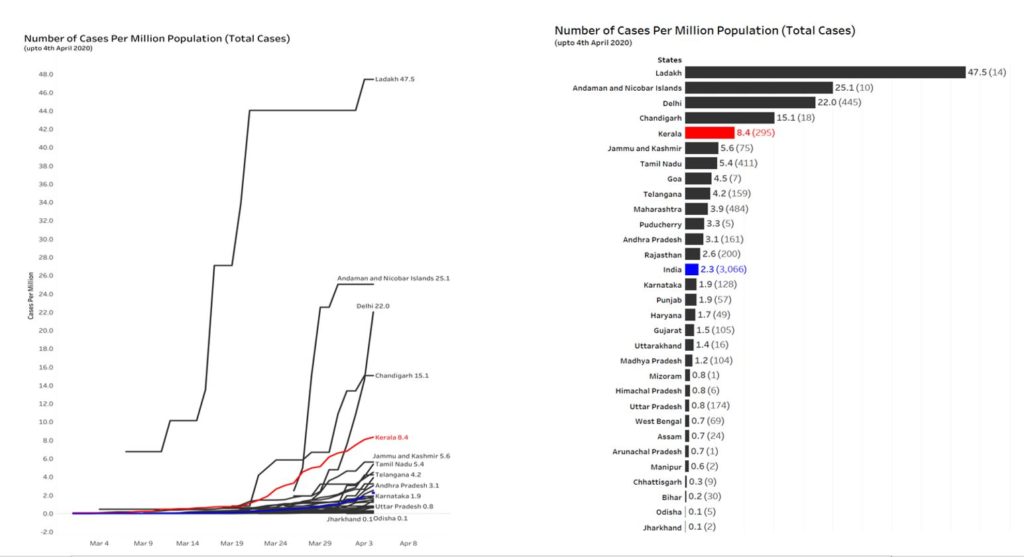 ICMR has now widened the testing criteria for COVID-19. This is a significant move, and all states need to step-up their testing capabilities. It is time for the states to implement surveillance measures based on the syndromic approach. The next few weeks are critical to enhance the containment measures by preventing community outbreaks, minimize the spread by early detection, treatment, and providing optimized care for all patients, especially the seriously ill. The first step in this to detect every probable COVID-19 case. Next is to establish the diagnosis by validated tests, isolate cases and provide early clinical management. The action is now at the state level. If done well, the containment measures can help minimize the impact of the epidemic on health systems, social services, and economic activity.

Acknowledgments: We thank Solomon T for help on illustrations.

Dr.Giridhara R Babu is a Professor and Head, Life Course Epidemiology at Public Health Foundation of India. He is an intermediate fellow of Wellcome Trust-DBT India Alliance and is the P.I of @_MAASTHI cohort. His research focus lies in life course epidemiology by identifying the early markers and thereby contribute to the prevention and management of NCDs. He has spent more than six years in disease surveillance and epidemic response. @epigiri

Deepa R is Research associate at the Public Health Foundation of India and a Ph.D. fellow at Maastricht University. Her research interest lies in studying Nutritional markers in pregnant women and adverse birth outcomes.@deepasheregar

Andaman: Covid-19: The remote islands of Andamans aren’t spared, either – The Hindu BusinessLine Published on March 31, 2020