The leading cause of death worldwide for a young woman is HIV. (1) The literature shows that teenage girls and young women are twice as likely to be at risk of HIV infection than teenage boys and young men.  In some countries the prevalence of HIV in adolescent girls is up to seven times greater than that of adolescent boys. (2)

The utilisation of healthcare services is also important when it comes to gender inequality. Studies have shown that gender inequality can affect the use of maternal health care services especially in rural areas. Women who live in areas of rural Africa, where gender norms include tolerance to violence against women are less likely to attend antenatal care and use birthing facilities. (3)

The case report ‘Pregnancy complicated by haemorrhagic ascites in a woman with newly diagnosed HIV’ tells the story of a Zambian woman of low socioeconomic status and the healthcare inequalities she faced. (4) This pregnant 24-year-old presented to Lusaka, Zambia’s capital having traveled on the public bus for over eight hours from a rural region of Zambia.  She was 15 weeks pregnant and presented with a gross ascites that she had noticed for over a month.  This was her third pregnancy and she had received no antenatal care. On routine testing she was found to be HIV positive and was unaware of this diagnosis.  This woman was unemployed, illiterate and could only speak her local dialect.  She then went on to have surgery where a giant haemangioma measuring 21cm was excised.

This woman’s story demonstrates the barriers to healthcare millions of women in developing countries face every day.  The combination of gender discrimination, lack of education and low socioeconomic status results in these women presenting at a later stage of illness, less likely to access routine healthcare and at a greater risk of contracting HIV infection. 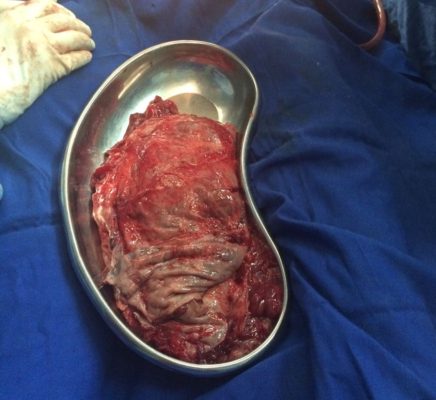 What can be done?

With the emergence of many powerful female leaders over the past few years, now is the time to empower young women and girls across the world and to put a stop to gender inequality, that our patient faced in this case report. This could have a huge impact on healthcare across the world with the reduction of infections such as HIV and ultimately putting an end to AIDS epidemic across Africa.