Xavier Hames is a four year old boy with Type 1 diabetes and he has been fitted with an insulin pump that senses glucose levels and stops insulin – a step closer to an ‘artificial pancreas’. An artificial pancreas adds a glucose sensor to an insulin pump so that it can sense when to reduce or stop insulin to avoid hypoglycaemia. More sophisticated devices are being developed to improve the management of people requiring insulin.

Xavier’s story has been widely reported in the news:

“Four-year-old Perth boy Xavier Hames has become the first patient in the world to receive an artificial pancreas as part of his routine diabetic care.” https://lockerdome.com/biosolutionscorp/7346894150058004

“A four-year-old Australian boy has been fitted with an artificial pancreas in what researchers said was a world first treatment for managing type 1 diabetes.” http://medicalobserverph.com/features-australian-boy-4-gets-world-first-artificial-pancreas/ 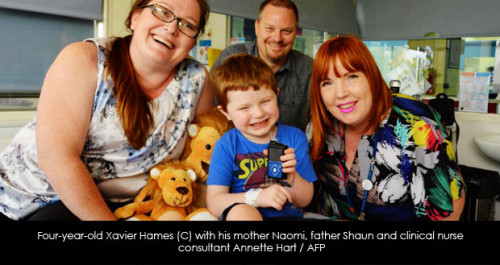