Sexual and reproductive health provokes the kind of righteous anger that Twitter thrives on. By trying to provide a beacon of nuance and open-mindedness we’re running against the grain, but I don’t always get that right so I have to take responsibility for some of the bad tweets posted on Twitter over the last month.

Operating the Twitter account for BMJ Sexual and Reproductive Health is a privilege because I’m exposed to a wide range of opinions. Sometimes completely reasonable tweets from our account attract snide remarks and sometimes my tweets miss the mark. Here’s a run down of @BMJ_SRH’s recent run-ins with the twittersphere. 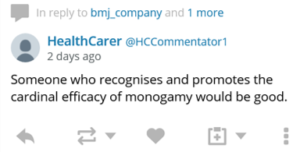 In one sense, it’s a good point. Concurrency of sexual partnerships is a risk factor for sexually transmitted infections. We know that already.

But if the tweeter thinks that promoting monogamy is all there is to SRH then the tweeter is oversimplifying. People can avoid sexually transmitted infections whilst engaging in concurrent partnerships, but we also have to treat people when their preventative measures fail. Plus, consecutive monogamous relationships can allow transmission of sexually transmitted infections.

Monogamy is neither necessary nor sufficient for sexual and reproductive health so the tweeter is wrong to call it “cardinal”. Having said that, I don’t think HCCommentator1 really thought it would be helpful.

As I’ve touched upon before, the words we use to discuss sexual health can be confusing, particularly across languages and cultures. We published an article about an IUD which perforated the bowel and was passed from the rectum. One tweeter interpreted the words “opened her bowels” to mean a surgical operation on her colon. 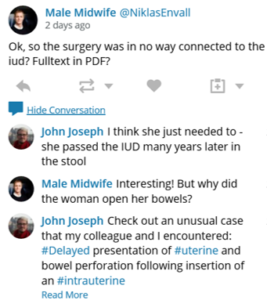 In a rare instance of twitter improving discourse I was able to reach out to Niklas and clarify. As a global journal we need to use straightforward language and remain alert to local idiom.

The NHS Digital team tries to avoid the word “bowels” and any euphemisms. Instead they opt for simple, lowest-common denominator language. 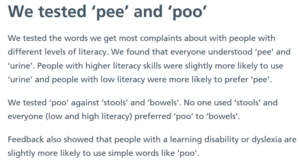 One lazy Sunday morning I retweeted an Observer article by a regular columnist, suggesting that Meghan Markle’s homebirth will be particularly safe because a large medical team will be on hand. The columnist suggested that it would be concerning if this led to increased popularity of homebirths because most women would have fewer healthcare professionals on hand. She claimed this was just an example of privilege with the potential to harm ordinary women.

Some midwives helpfully tweeted to clarify. I liked this from @Geowoodster 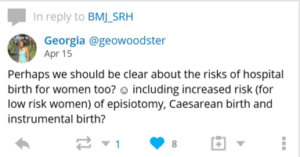 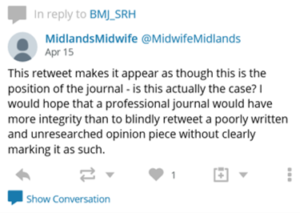 I’d be concerned if our Twitter followers couldn’t distinguish a peer-reviewed journal article from an opinion piece in a Sunday supplement. I’m going to keep on sharing interesting views in the popular press related to reproduction and sexuality and trust our followership to make their own decisions. In fact, that’s not dissimilar from how @marytcurtin suggested treating patients: 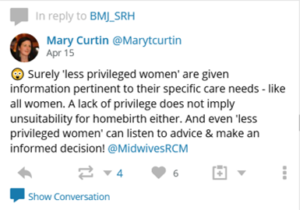 Thanks to everybody who engaged with the BMJ SRH Twitter. Even the comments I disagreed with were food for thoughts. All our readers should be allowed to evaluate sources and think for themselves. My tweets are not divinely inspired, let alone peer-reviewed. Please don’t treat my tweets as gospel.