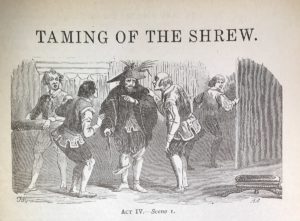 The RSC’s new gender-flipped production of The Taming of the Shrew highlights the often overlooked coercive and controlling behaviour in the script.

Rewriting male characters as female can be done without changing much at all, as in the production of Timon of Athens at the Royal Shakespeare Company (RSC) earlier this year, where the title character was rendered female. However, in The Taming of the Shrew now running at the RSC, the casting of all female characters as male, and vice versa, changes the entire production. The imagined matriarchal Padua is so absurd that I felt like I was watching two plays, first taking in the ironical re-gendered action before my eyes, before I replayed each line in the original genders.

In one half of the story, this is played for laughs. “Bianco” exaggerates the character’s relaxed passivity. The effect of the aging Gremia leering over the beautiful young Bianco becomes comic; she quivers and runs her hands towards her crotch whenever she mentions him. It is tragic in the silliest sense and completely unthreatening.

Bianco cannot marry until his rude and aggressive older brother “Kate” does. Petrucia agrees to marry Kate, convinced she can tame him, but this plotline becomes increasingly dark.

The inversion of gender adds force to Kate’s angry outbursts. For me, the classic Kate is Julia Stiles’ riot girl teenaged Kat in 10 Things I Hate About You. In this production, however, a grown man tells Hortensia he wants “To comb [her] noddle with a three-legg’d stool”. It’s scarier.

During their back and forths, Petrucia keeps up with the storming Kate and maintains the two-way energy that traditionally keeps the play in balance. If Kate’s agency remains, the taming feels like part of well-matched a battle of wills. Perhaps it would be entertaining to see Kate’s eventual acceptance of Petrucia, if it came from begrudging recognition that Kate has found an equal and a worthy adversary, or (as Bianco puts it) that “being mad herself, she’s madly mated”.

In this production, however, agile Petrucia quickly wears down an emotional Kate and takes him away from his family. This leads to harrowing scenes where Kate is denied sustenance, clothing and sleep. Petrucia engages in ‘gaslighting’, demanding gratitude and withholding food when it is not forthcoming.

Some have argued that Petrucio’s taming technique reflects the techniques of falconry, whereby keeping a bird awake meant that the falconer remained awake, and going hungry entailed the falconer going hungry too. Shakespeare’s script hints at mutual deprivation but in this production Petrucia remains upbeat throughout and shows no sign of being physically tested. As the ‘taming’ continues, there is little evidence of collaboration or good humour. Petrucia is mocking when she forces Kate to say that day is night and call an old lady a young man. And the final speech where Kate invokes women to “place your hands below your husband’s foot” lacks any ironical wink at the audience.

Petrucia’s response – turning to proclaim “now, there’s a man” – prompted cheering in the Swan Theatre, perhaps brought on by Petrucia’s revenge after four centuries of male-on-female abuse. But that explanation is hollow because submissiveness is not conventionally masculine, so the statement is false. This jarring fallacy in the closing lines reminds the audience that The Taming of the Shrew is not really about a woman taming a man. It is proof that the script does not make sense when every gendered term is inverted.

The lasting impression is bitter. Petrucia’s taming failed to articulate a vision of equality, and with the comedy and comradery cut out the harrowing scenes of intimate partner violence dominate the performance.

The same themes are displayed in the recent BBC documentary Abused By My Girlfriend which describes the events leading up to the first conviction of a woman for coercive and controlling behaviour. Alex describes how his partner, Jordan, cut him off from his family, made him sleep on the floor, woke him up by pouring boiling water on him, denied him food, and cut him with knives. Although we know the vast majority of intimate partner violence is perpetrated by men against women, the gendered dynamics of Alex’s story force the viewer to reflect on the non-physical elements of control; it can be easy to attribute male control of female partners to physical strength but Jordan’s control over Alex highlights how coercive words and manipulation facilitate physical harm.

The Crown Prosecution Service defines controlling behaviour as “acts designed to make a person subordinate and/or dependent by isolating them from sources of support, exploiting their resources and capacities for personal gain, depriving them of the means needed for independence, resistance and escape and regulating their everyday behaviour”. It is striking how isolation, deprivation, and preventing resistance are themes in both Kate’s story and Alex’s.

Alex has emerged from his relationship stronger, speaking out and seeking to help other men and women in abusive relationships. Kate gets no such closure. There’s no prison sentence for Petrucia. Kate’s family are impressed by Petrucia’s control. But perhaps this lack of closure adds one more lifelike element to the play because many victims of coercive control never get out; the Office for National Statistics reports that two women are killed by male partners each week in England and Wales, often with a background of controlling behaviour. Helping people leave abusive relationships is a public health emergency.