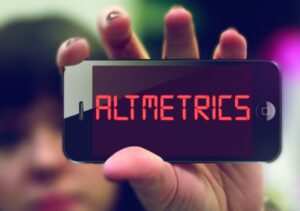 Among the various criticisms of traditional journal metrics is that, given the timelines involved in academic research and publishing, metrics based on citations alone cannot capture the attention received by publications in the period immediately after publication, nor the wider impact beyond the academic research community. Other data can help to show which recent publications are getting significant attention, including journal-level data on article reads (as explored in our regular Top 10 blog posts). Various alternative metrics can also be informative, including data from Altmetric, which collates mentions of research articles from across various sources including news reports, blogs, social media platforms, Wikipedia entries, Mendeley reads, and more, generating an overall weighted score for the attention each article has received.

Based on Altmetric scores for articles published in BMJ Open so far in 2022 (as of June 7), one paper is way out in front in terms of attention—with an Altmetric score of 1028. Malin Sund and colleagues’ retrospective cohort study used national data from Sweden to investigate whether pharmaceutical modulation of oestrogen in postmenopausal women was associated with mortality risk following COVID-19. Their findings, while limited by the retrospective, observational study design, suggested that oestrogen supplementation was associated with a decreased risk of dying from COVID-19, with the authors concluding that randomised trials could be warranted. Based on Altmetric data, the study was picked up in 127 international news reports, as well as garnering significant attention on Twitter.

Other articles in the top 10 highest scoring papers reflect different levels of attention from different sources. For example, in second place (with an Altmetric score of 694), John Ioannidis’ analysis of the citation impact and social media visibility of signatories of the Great Barrington Declaration and John Snow Memorandum on COVID-19 strategies was not widely covered in news reports but generated extensive attention on Twitter, including critical responses that are also reflected in the lively discussion in the Rapid Responses to the article on the BMJ Open website.

COVID-19 dominates our top 3, with third place taken by a cross-sectional survey linking adverse childhood experiences with attitudes towards COVID-19 restrictions and vaccine hesitancy (Altmetric score 660). But, perhaps surprisingly, none of the remaining papers in the top 10 are related to COVID-19. Highlights include Marie Clinckemaillie and colleagues’ analysis of financial ties between the key opinion leaders from professional medical associations and the pharmaceutical industry in France (fourth place, Altmetric score 550; mostly based on attention on Twitter), Haris Majeed and John Floras’ analysis linking warmer summer nights with an increased risk of death from cardiovascular disease among men aged 60–64 years (fifth place, Altmetric score 391; mostly based on news reports), and Yanina Balabanova and colleagues’ matched cohort study reporting a mean 50% increased risk of venous thromboembolism in men with prostate cancer during the 5 years following their cancer diagnosis compared with men without prostate cancer (eighth place, Altmetric score 324; mostly based on news reports).

The full top 10 list of highest scoring papers on Altmetric from BMJ Open from 2022 so far (as of June 7) is shown below.