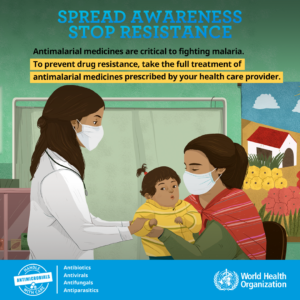 At BMJ Open, we wish to highlight events and topics of significance to our readers. Today saw the launch of the annual Antimicrobial Awareness Week (18-24 November 2021), promoted by the World Health Organization (WHO) since 2015. The theme for this year’s awareness week is “Spread awareness, stop resistance.” A series of webinars will be hosted throughout the week.

Antibiotics and other antimicrobials have been invaluable in reducing mortality from infectious diseases around the world since the 1930s. However, it is now well-established that inappropriate use of these drugs, such as excessive or unnecessary dosing, has led to the rise of resistant strains of pathogens. Once resistance to a given drug emerges, our toolset for treating each disease becomes ever smaller. Yet, the development of new drugs to take the place of those that have become less effective is lagging behind.

Therefore, it remains imperative that we continue to take action to minimise the risk of the development and spread of further resistance. The WHO advocates a ‘One Health’ approach, which involves coordinated action between all relevant sectors, including clinicians, policymakers, and even agriculture stakeholders. Most recently, during the COVID-19 pandemic, it has also been imperative to stop misinformation relating to use of antibiotics, which are ineffective in treating a viral disease.

Celebrating its 10-year anniversary this year, BMJ Open has been the venue for a number of notable and impactful studies in the area. We give a brief overview of these below.

A 2013 systematic review highlighted the prevalence of counterfeit or substandard medicines, which could contribute to the rise of antimicrobial resistance. The authors noted that this problem is particularly widespread in low- and middle-income countries, in Africa and Asia.

In 2014, an analysis was published on prescribing patterns at over five hundred general practices in the UK. This study demonstrated that most practices prescribed antibiotics for upper respiratory tract infections at rates that were too high to be clinically justified. In the same year, a qualitative study in long-term care facilities concluded that “the lack of implementation of guidelines and knowledge regarding antibiotic prescribing patterns are significant challenges to address”.

An analysis of 1 million admissions over 16 years at a hospital trust in Scotland, published in 2015, revealed that infection control and population antibiotic use targeting methicillin-resistant Staphylococcus aureus (MRSA) needs to take into consideration strain-specific differences. Another long-term analysis published that year on diagnosis of sexually-transmitted infections in England revealed that “many of those treated for gonorrhoea received antimicrobials no longer recommended for use.”

In 2016, we published the STROBE-AMS checklist, an extension to the Strengthening the Reporting of Observational Studies in Epidemiology (STROBE) guidelines, which aims to optimise reporting of epidemiological studies on antimicrobial resistance and informing improvement in antimicrobial stewardship.

More recent qualitative work from 2018 has highlighted the importance of hospital pharmacists in facilitating antimicrobial stewardship, while also pointing out the barriers faced in the pharmacy environment.

While the problem of antimicrobial resistance is unlikely to be resolved soon, we hope that the importance of this issue will continue to be recognised.

Got a favourite BMJ Open paper on antimicrobial resistance or stewardship? Tag us on Twitter with @BMJ_Open to let us know!