The 2D:4D digit ratio and autism risk: is there an association? 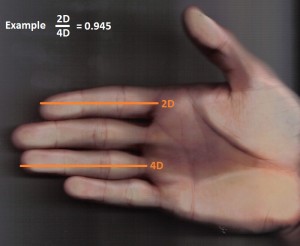 In December we surveyed our staff editors to tell us about their favourite articles from 2015. Our penultimate editors’ pick investigates the relationship between autism risk and a putative marker of testosterone exposure: the 2D: 4D digit ratio.

In spite of large investments in autism research, the underlying causes of autism diagnoses remain largely unknown, although twin and family studies suggest that autism is highly heritable. Perplexingly, autism is more frequently diagnosed in males, with male-to-female ratio estimates ranging from 2:1 to 9:1. A popular theory put forward to explain the sex differences behind autism diagnoses is the ‘Extreme Male Brain theory’, which proposes that people with autism are exhibiting an exaggerated profile of the male cognitive profile. A proposed physiological mechanism underlying this theory is the effect of prenatal sex steroids (such as testosterone) on the developing brain. The index to ring finger ratio (2D:4D digit ratio) is believed to be a proxy for fetal testosterone exposure; males have a lower 2D:4D digit ratio on average than females.

In this study by Anna Guyatt and colleagues, the 2D:4D digit ratio was examined in 6015 children from a British birth cohort known as The Avon Longitudinal Study of Parents and Children. The 2D:4D digit ratio was then tested for association with autistic traits in the general population and with autism diagnoses. Analysis of the data did not indicate a significant association between 2D:4D digit ratio and autism diagnoses or high autistic traits in the general population for either sex. Thus, the data did not support the extreme male brain theory of autism.

The study is just one of many published in BMJ Open in 2015 reporting negative findings. We believe that a study should be published irrespective of the direction of the findings providing that the study meets our publication criteria. Publishing negative findings has the added benefit of combating the damaging effects of dissemination bias in medical research (see Editors’ Picks 2015: Part Three)