After my musings on Bern 2018 , many people were understandably desperate to read my digest of the 16th EAPC World Congress in Berlin, so here it is.

Yes, a very large event took place in Berlin at the end of May 2019. The Palliateurs and the new EAPC Poetry & Music Slam came together on a warm Thursday night in Berlin, to some wonderful tunes and live slamming sessions.

Well done to all the winners, including Dr Nicola White. Alongside this was the smaller matter of the European Association for Palliative Care World Congress 2019 . I say small, because a new trend for very small posters was started here, and took traction (see tweet below).

The science , technical aspects and *all the abstracts and bantz* can be found here.This is my guide to the scenes behind the scenes in Berlin and some of the go-to-destinations for future travelers (Ed – the Bowie Bar “Neues Ufer” was a loooong taxi ride from the conference, the peppermint Schnapps called Berliner ‘Luft’ made us gasp for more Luft, and the evenings were rather fantastisch (Guckst Du hier: https://theculturetrip.com/europe/germany/articles/a-guide-to-david-bowies-berlin/ ). 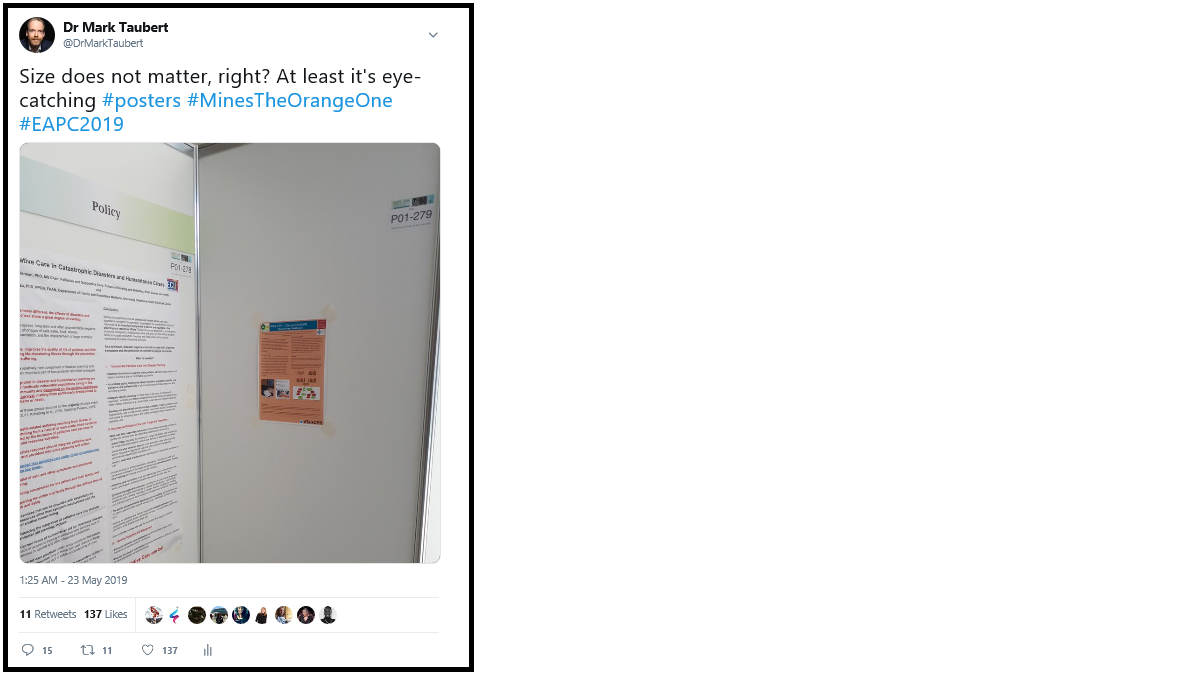 The Michelberger Hotel in Berlin Friedrichshain provided us not merely with a bed, but also with constant life & death wisdom, by piping The Big Lebowski through all its TV channels 24/7. And also provided us with copious amounts of disgusting Coconut Water called the Fountain Of Youth, even at breakfast. Nein!

Having said that, my skin feels a lot better now, than it did after Bern.  I also took a wonderful walk from Friedrichstrasse to Potsdamer Platz (you never knew you can do that, but, yes, it is entirely possible!) & beyond to Checkpoint Charlie. It is impossible not to be awed by the palpable history in these locations. When I needed respite, the beer garden opposite the Estrel Congress Centre provided some much needed Berliner Pilsner and ‘Radlers’ (beer with lemonade) between, during and after learned sessions.

The multicultural and historical aspects of Berlin do reflect well in the enormous Pretzel-Fest of parallel sessions and the wide variety of subjects here at congress. And while it was not a research congress per se, one or two new bits of data were available. For example that the Twitter account for Palliative Medicine (journal) was in need of a boost to get to 13K. In a world of Big Data and whole genomic sequencing and digital life (more on that later), we really ought to embrace urgently the full breadth of these new scientific developments. Some starting points were made here at congress. I was left very excited about the Palliative Symptoms App: https://mypal-project.eu/, sadly not including the UK at present, but if we do leave the EU and then hopefully re-join again, who knows, they may let us be part of the fun.

As always with these things, you take from them what you will and what you need – from the lack of morphine globally, pointed out in a number of plenary sessions, to the complete absence of evidence for cannabis or what its actual useful substrates might be, to the measurement of suffering, to asking the surprise question (“Would you like some curry powder on that sausage wurst?”), to the use of social media and even mixed/virtual reality for education. Paper of the year went to a qualitative study on homeless populations in need of palliative care. All notable areas that will take much collaborative work and investment in years to come.

The highlights came from how gender imbalance has been addressed at EAPC congress. It was nice to see that most of the plenaries here were given by eminent ladies to a packed house. On the other side of the coin, a number of sessions addressed a different form of gender imbalance: if you are a carer to someone with palliative needs, it is likely that you are female, and this was similar in low, middle and higher income countries across the globe.

Later, after Doener Kebabs, we were sitting in a gay bar in Berlin’s Kreuzberg drinking Caipirinhas  (the name of the bar was  Barbie Deinhoff’s, for the intrepid traveler who wishes to follow in our steps). Here, we were pleased to find that gender was ‘not a biggy’ when it came to these parts of town, see the red picture.

We were so delighted, that we subsequently took to the Lido on Schlesische Strasse, and they kindly even played “Let’s Dance” for us weary Palliators, on request by a certain Dr Catherine McGowan. Who then took over musical direction entirely at this location, pity the poor DJ, but some great tunes followed. Needless to say that one member of our group did not make it to Berlin Parkrun the next morning at 9am.

Back to congress with a bit of culture thrown in, a certain trio (Oliver Minton, Mark Taubert, Paul Keeley) chaired and spoke at an afternoon free session, mysteriously entitled “Miscellaneous”, and closed it with some David Bowie readings, that had relevance to both palliative care and Berlin. And yes *that* posthumous letter to DB was read here for a final time, accompanied by the Bowie/Eno/Visconti instrumental “Neukoelln” from the album Low.

The conference was hosted at the Estrel in Berlin Neukoelln, so it felt fitting. Readings were conducted with significant silences thrown in, and the fact that audience members cried, pays testament to the power of poetry, songs and letters. Next year’s theme: the use of silence in palliative care conference readings, perhaps with John Cage’s 4’33” thrown in for good measure. Who knows?

So “Where are we now? The moment you know, You know”- to paraphrase some more Berlin Bowie. At least by the end of congress you should know you are mortal and that your digital life will live on long after your death (*makes note in CPD folder). It was only fitting that the Friday close to the congress came with the 2019 Digital Legacy Conference, organised by James Norris and expertly chaired by Dr Ros Taylor.

Facebook sent a senior executive to the event, who talked about some of the moral and ethical issues that have come up in recent months and years, and how to set up a Facebook executor for your digital bits and bobs.

She recruited about 10 palliative care audience members to Facebook in the process, so there’s a real need from the social media companies to engage with our expertise, even language around these matters. Silicone Valleys people still prefer terms like “Pass Away” to “Dying”, it seems. There was so much food for thought during the sessions for this event, and hopefully this segment will be included as a regular feature in EAPC conferences in years to come https://digitallegacyconference.com/ Worth looking at the recently launched website to help you plan ahead regarding all your digital belongings and what happens after you die, if you really want to be prepared: https://www.mywishes.co.uk/ In the interest of blatant self-promotion, my bit on that site can be found here.  I do hope we will make this an annual event – Palermo Helsinki and beyond.

Needless to say, a big Thank You is in order for the many people who organised EAPC Berlin 2019, and a big “Danke” sing-song was indeed to be had on the final day in the Plenary Hall. Willkommen to our new President Christoph Ostgathe and new EAPC board. For all the other comments, gossip, photos, architecture, videos and erections, there’s the #eapc2019 hashtag on Twitter, there are some truly wonderful memories on there if you do find time to have a browse.

See you in Palermo,

Iron deficiency in patients with cancer: a prospective cross-sectional study