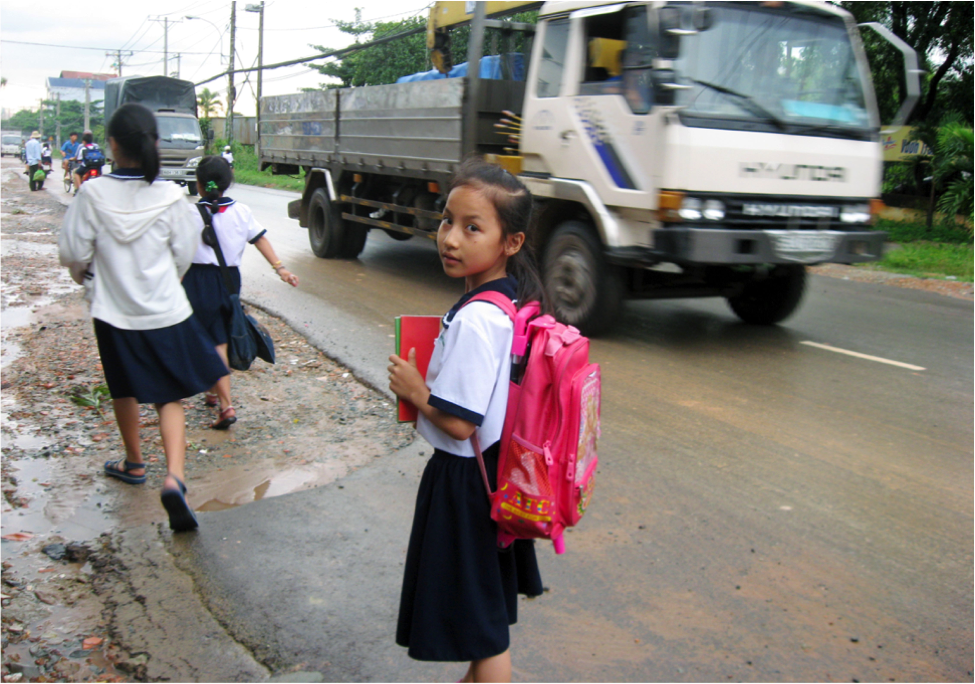 Can you imagine… that there are 68 people are killed on our roads in Vietnam every day? Every single day, 68 people leave their homes in the morning and never return. This is the same as one Airbus A380 crashing every week – with everyone on board dying. It’s a tragedy that goes beyond imagination. It is particularly difficult to accept that children and young people are the most affected. Road traffic crashes are one of the leading cause of death for children ages 5-14 years in Vietnam. According to the Global Burden of Disease Study for 2017, we lose 2,150 children in road crashes every year. And it doesn’t end there. According to official sources, for every child that dies, four are permanently disabled and another ten are seriously injured.

Many children are killed on their way to or from school, on their daily commute to get an education. Dangers are everywhere. People drive down the wrong side of the street, fly through red lights, and drive on the sidewalk when the streets are too jammed. Speed, in particular, is a major contributing factor in many of the fatal crashes.

In other parts of the world, there are school zones, which according to iRAP are “areas within the vicinity of schools and other educational establishments where school children and young pedestrians are likely to be present in high numbers. School zones will often incorporate reduced speed limits for certain times of the day… and are likely to have appropriate road signs and markings to make motorists aware of the presence of vulnerable road users such as young pedestrians and bicyclists.” In Vietnam school zones do not exist. In fact, young children and pedestrians are the least respected in our traffic chaos. Crossing a six lane national road – without a traffic light, without a zebra crossing – while avoiding the continuous stream of cars, trucks and motorcycles – that’s the daily reality for children. Nobody slows down for them. Nobody cares. Ignoring pedestrians is a socially accepted behaviour in Vietnam.

In 2017, Fondation Botnar launched the Child Road Safety Challenge (“The Challenge”) acknowledging the United Nations Convention on the Rights of the Child of 1989 which states that every child should be afforded protection, every child has the inherent right to life. “One important way to do this is to address the epidemic of children killed on the world’s roads,” says Fondation Botnar. The Child Road Safety Challenge is managed by the Global Road Safety Partnership (GRSP) with technical assistance in monitoring and evaluation by the George Institute for Global Health UK. It is implemented in thirteen cities in seven countries; India, Mexico, Romania, South Africa, Tanzania, Tunisia and Vietnam.

In Vietnam, the non-profit organization AIP Foundation was selected to implement its Slow Zones, Safe Zones project in Pleiku in collaboration with the local government and paint company KOVA. A consortium of public, private, and civil society partners each play important roles in the delivery of the programme.

Pleiku is located in the Central Highlands along the Southern Economic Corridor of the Greater Mekong Sub-region. There is increasing industrial traffic linking Bangkok in Thailand to the Vietnamese coastal city of Quy Nhon. Pleiku, the capital of Gia Lai province, is a province with 34 different ethnic groups living together where the average per capita income is less than US$5 per day. In 2016, in Gia Lai province, according to official sources there were 425 reported road traffic crashes that left 234 people dead (17 of whom were children) and 494 injured. Pleiku accounts for 24% of Gia Lai province’s cases. 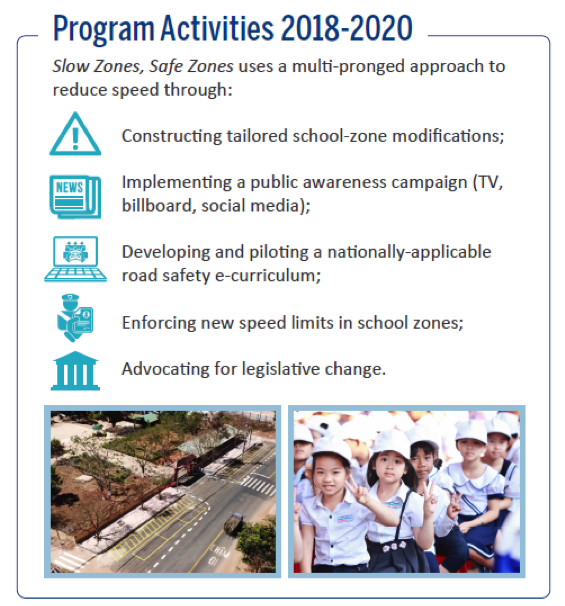 There are 33 primary schools with approximately 25,000 students in Pleiku. Two pilot schools (Phan Dang Luu school and Nguyen Luong Bang school) were selected to receive the full intervention. The school selection was based on:

Teachers and students from a further 31 primary schools were also engaged through workshops and the distribution of road safety education materials.

A pre-intervention, self-reported, road traffic crash survey among the 2,245 students at the two pilot schools showed that 569 (25%) students had experienced a crash of whom 196 had been involved in a crash near their school.

As part of the baseline assessment, a knowledge, attitude and practice (KAP) survey was also conducted among community members (parents) as well as speed observations around the schools. An assessment of the infrastructural risks to road users using the Star Rating for Schools (SR4S) app was also undertaken. The SR4S app is the first systematic, evidence-based approach for analyzing road safety risks in school zones.

AIP Foundation used these alarming results to advocate to the local government in Pleiku to lower the speed limits around the two pilot schools. A few months after release of the data, the provincial government officially announced reducing the speed limit from 50km/h to 30km/h at Phan Dang Luu school located on a two lane provincial road and from 60km/h to 40km/h at Nguyen Luong Bang school located on a six lane national road. 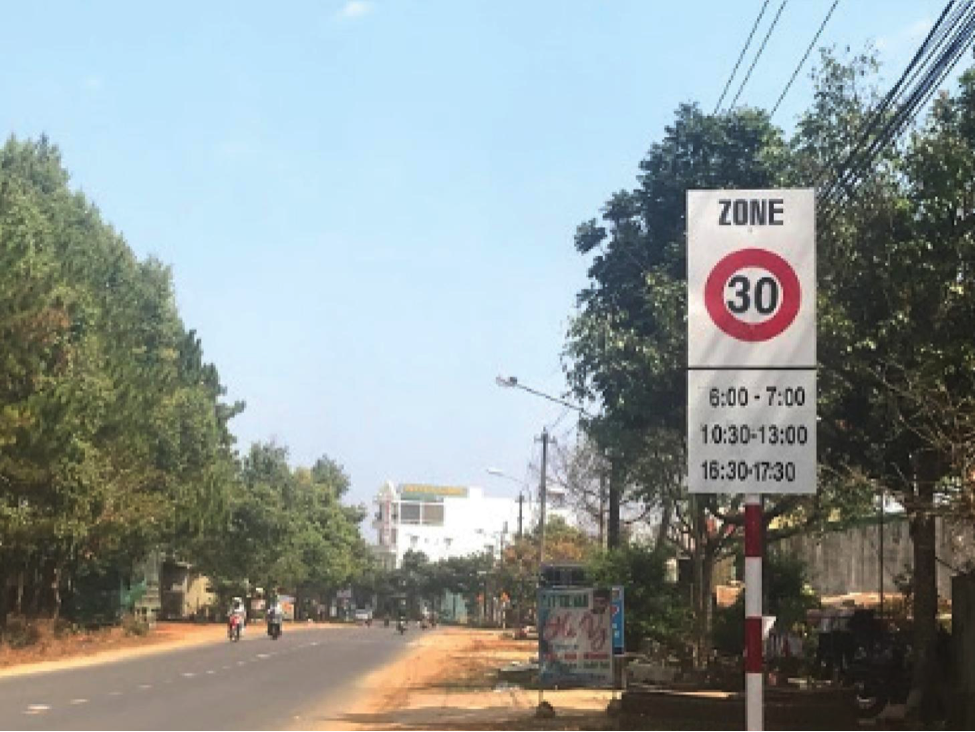 These infrastructural changes followed recommendations from a GRSP engineering consultant and a sample design provided by the World Resources Institute. KOVA’s high-end road marking paint, designed for wear and improved visibility in rainy conditions, will ensure that these modifications will last and be noticed. 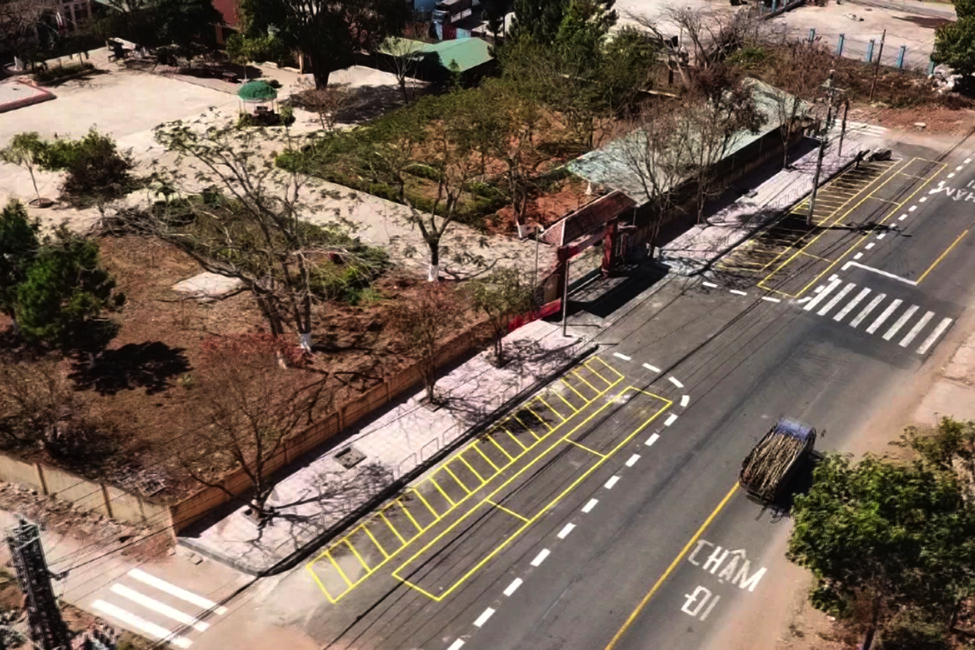 Along with the infrastructural changes, Slow Zones, Safe Zones also launched a public awareness campaign featuring billboards and a television public service announcement (PSA) entitled “The Wheel.” The PSA shows a young girl who becomes paralyzed after being struck on her way home from school by a carelessly speeding motorcycle. It explores the implications of reckless driving on the lives of the most vulnerable – young children – and emphasizes the importance of slowing down (watch the PSA here).

The Pleiku Police, who received training from GRSP, also commenced implementing a speed enforcement action plan at the two pilot schools in April 2019. During the first weeks of implementation, police officers reminded drivers of the reduced speed when passing through the two school zones. Since May 2019, drivers who violate speed regulations are fined.

In June 2019, Slow Zones, Safe Zones stakeholders conducted a mid-term review to reflect on achievements after one year of implementation. Surveys found that:

Evidence from around the world shows that a 5% cut in average vehicle speed can result in a 30% reduction in fatal crashes and so the Slow Zones, Safe Zones is likely to save lives.

Throughout the second year of the project, AIP Foundation will advocate for continued police enforcement and for expansion of the speed reduction legislation beyond the intervention schools. The consortium will also launch an innovative e-curriculum for road safety education designed to engage teachers and students. The current road safety curriculum published in 2000 is now outdated. The new learning tool will be less teacher-centric and more interactive allowing students to learn through videos, games, and activities.

The Slow Zones, Safe Zones project is expected to reach thousands of students and their parents, teachers and policy makers.

We need to work together – governments and NGOs, road designers and law enforcers, human rights agencies and corporate foundations – to put a stop to the unacceptable health burden that our children face. 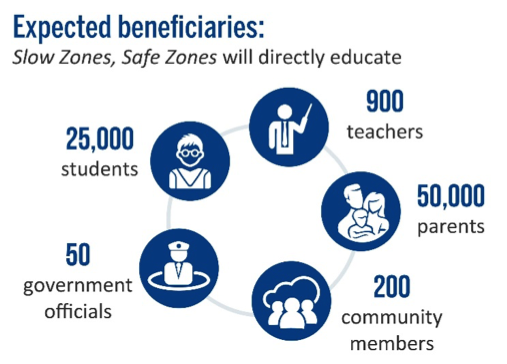