“We are not sure if this is a miracle, a science, or what. All the thirteen Wild Boars are now out of the cave.” ~ Thai Navy Seals via Facebook

The rescue of the Wild Boars soccer team and their coach from the cave complex in Thailand captivated the world. Collectively we invested in their (now complete) safe rescue, and felt the pain of the loss of Thai Navy Seal Saman Kunan.

As with the Grenfell Tower tragedy, we as injury prevention researchers and practitioners are well placed to add value to our collective understanding about injury prevention and safety promotion through the larger conversation about this rescue mission. This is not about shaming the team or their coach (who has been recognised as a key player in keeping the players alive and calm by teaching them meditation), but rather, as Pless stated here in Injury Prevention in 1999, “horrible events…are doubly tragic if they fail to teach vitally important lessons about safety”.

In this way, one particular aspect of how this rescue mission came together and the complexity of it struck me as relevant to our injury prevention intervention work. It is summed up succinctly in this tweet from Professor Trisha Greenhalgh:

What didn’t get the #Thaiboys out of the cave?

A well-intentioned high-tech solution produced at great expense in a different country.https://t.co/w5jraem6YS

The well-intentioned high-tech solution? I had too written about that in this Twitter thread:

Struck by how Musk’s mini submarine – “made of rocket parts and named Wild Boar after kids’ soccer team”- is a teachable moment for intervention research in #complex settingshttps://t.co/X9duXuYgah

The inherent complexity of this rescue and the similarities with examples across our injury prevention intervention research are striking. Musk’s submarine (the high-tech solution) is indeed highly sophisticated and built through ‘rocket science’, yet on-site it was deemed ill-suited for this complex rescue mission. How is this so and what can we learn from it?

Let’s take a look at why, using complexity theory.

First, a good piece here of what this labyrinth cave complex looks like, and what the rescue entails (or, at the very least, the *known* problems the rescue mission was likely to encounter).

Next: a short video of the Musk submarine being tested. Notice, compare, and contrast context.

Yes, Musk later *brought elements of context in* by testing the submarine for narrow spaces the size of those encountered in the Thai cave complex…

Yet, “he was politely told that a small submarine he offered rescue workers was surplus to requirements. Narongsak Osatanakorn (the head of the joint command centre coordinating the operation) told journalists that ‘Although his technology is good and sophisticated it’s not practical for this mission‘. 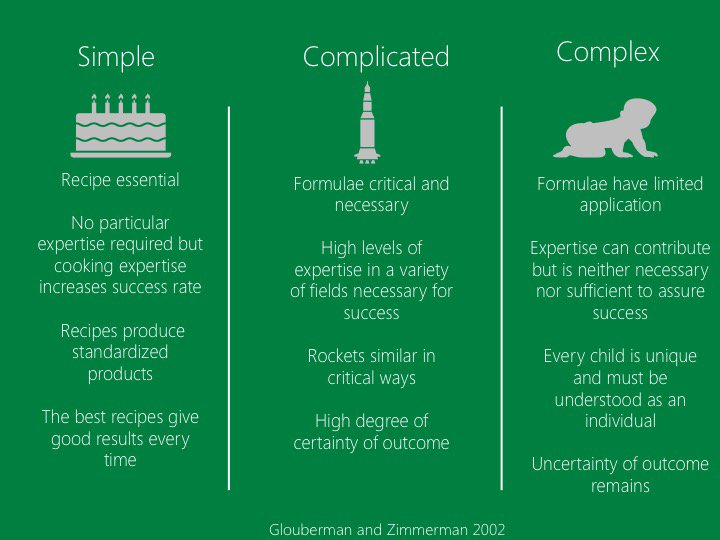 It is important to note that complex does not just mean ‘very complicated’, as complexity is fundamentally different to complicated in a number of crucial ways – demonstrating non-linearity, emergence, and the ability to evolve, learn, and adapt. Musk’s submarine casts both the problem and the solution as *complicated*, yet the Thailand cave rescue is inexplicably and indisputably *complex*. This is not merely a problem of getting from A to B. Here, the whole of the rescue mission is equal to *more* than the sum of its parts.

This is because complicated approaches tend to *add aspects of context back in* after development in a controlled research environment as Musk did here, testing the submarine for cave dimensions. Yet, interventions for complex problems developed under complicated approaches are always going to fall short in critical ways. This is a matter of ontology (understanding the world as inherently complex), rather than method (how we study complexity). Thus, there is a need to approach injury prevention problems with complexity as worldview, rather than adding it back in after interventions have been designed. This better accounts for interventions that are responsive and suited to ‘real-world’ contexts.

Notice the time-lag here too. By the time the submarine reached the site, 8 boys had already been rescued. Time (lag) is a key component of our intervention research too, manifesting in the 17 year gap between research and and its use in practice. This matters in the ‘real-world’.

Injury prevention interventions are almost always complex *social* interventions. Getting comfortable with the inherent uncertainty of human interventions is a strength that we must grapple with, rather than write out. Complex does not mean perfect, but it does mean that its associated approaches are often highly pragmatic and responsive to context (as we have seen with the rescue mission learning, changing, adapting each new day as conditions change). It seems the Thai Navy Seals recognise this too:

“We are not sure if this is a miracle, a science, or what. All the thirteen Wild Boars are now out of the cave.” ~ Thai Navy Seals via Facebook