[Angy El-Khatib] This post is from guest blogger Bethesda Yohannes. Bethesda is an intern at the Injury Prevention Center of Greater Dayton in Dayton, Ohio, United States. She is currently a second year undergradute student in the College of Education and Human Ecology at Ohio State University.

As the journey to reduce traffic-related fatalities continues, more information is becoming available to aid in this expedition. Traffic fatalities have been present ever since the time of buggies and horse-drawn carriages. Although traffic-related casualties have occurred since the beginning of vehicle transportation, the tolerance for these accidents remains low due to the high potential for prevention. Recently, the Insurance Institute for Highway Safety (IIHS) published a report which explores the correlation between mortalities and factors such as weekends, unemployment, and technology.

The 2017 IIHS report reveals that traffic-related death rates increase during weekends and holidays. According to the IIHS, increa 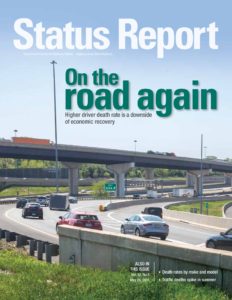 sing death rates can be linked to risky behaviors that take place during these periods. Although roadway deaths have decreased since 1998, the pattern of deaths remains stagnant. As Charles Farmer, IIHS Vice President for Research and Statistical Services, said, “The riskiest times remain risky.” However, with proper enforcements these rates can decline. New Years Eve and [American] Independence Day are the two holidays with the highest, traffic-related fatality rates; however, when increased impaired-driving enforcement (i.e. – DUI checks) are initiated during these holidays, traffic-related fatalities went down 5% during New Years Eve and 13% during Independence Day.

Although traffic-related death patterns have remained the same, they have decreased within the last decade; this can partly be attributed to advances in technology relating to motor vehicles. Improved safety technology and newer car models have resulted in slightly reduced driver death rates. Factors, such as the size of the vehicle, are being investigated; for example, small, four-door cars were found to have the highest death rate (87 deaths per million) whereas SUVs had the lowest death rates (6 deaths per million). Crash avoidance technology and “self-driving” vehicles could, in theory, reduce crash rates. However, as Farmer points out, “Improvement in vehicle technology are important, but we also need to address old problems such as speeding and driving while impaired.”

Unfortunately, improvements in the economy do not always equate to lower death rates; the decline of unemployment rates due to a flourishing economy have been linked to the increase in traffic fatalities. This increase is not only due to an improved economy, but rather the increase of vehicle miles as more people attend work. If the U.S Bureau of Labor Statistics prediction of an annual decline of 1.7% in unemployment from 2014 to 2024 continues, it is expected that the , traffic-related death rates will reduce from 35,092 in 2015 to 34,400 by 2024. An improved economy may be related to increases in highway fatalities or accidents at the workplace, but lifestyle factors could also play a role. We know that smoking, alcohol use, obesity, and physical inactivity rise when unemployment rates fall.

The exact correlation between unemployment and traffic-related death rates are still being researched as more data about the multiple factors continues to be collected. Researchers remain puzzled about the most effective and efficient methods to prevent traffic-related deaths, but efforts continue. Partnerships with court systems, law enforcement agencies, hospitals, and other community organizations (such as Mothers Against Drunk Driving or the American Automobile Association) allow injury prevention professionals to identify high-risk individuals and make a population-level impact. Surveillance of traffic-related crashes and reports, such as the IIHS report, are necessary to better inform policy and/or community-level interventions.