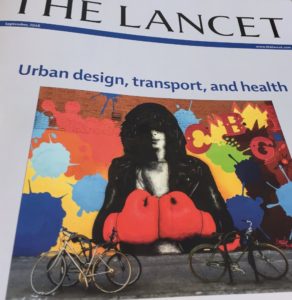 “Worldwide, the majority of people already live in cities and by 2050, it is estimated that 75% of 10 billion people have cities as an important social determinant of health. Air pollution, physical inactivity, noise, social isolation, unhealthy diets, and exposure to crime play a very important part in the non-communicable disease burden. This 3-part Series explores how integrated multisector city planning, including urban design and transport planning, can be used as an important and currently underused force for health and wellbeing within the framework of the Sustainable Development Goals in both high-income countries and low-income and middle-income countries” Executive Summary

The Lancet recently launched a new series on Urban Design, Transport and Health. Of interest to Injury Prevention readers will be the outcomes around the United Nations Sustainable Development Goal 3: good health and wellbeing – of which this series focuses on targets around the reduction of road trauma:

“The health impacts we looked at were those that had a direct relationship to the transport system and and our urban form, and we also looked at what I call the byproduct of our motorised society – which is road injury and deaths” ~ Mark Stevenson

In particular, the second paper in the series – Land use, transport, and population health: estimating the health benefits of compact cities – quantifies the relationship between land use, urban design, population density and transport systems, and the public health impact thereof in 6 international cities (Melbourne, London, Boston, Sao Paulo, Delhi, and Copenhagen).

A central recommendation of this research, within the framework of the UN Sustainable Development Goals, is for ‘compact cities’ in which people are able to live and work in neighborhoods with safe infrastructure that makes everyday active transport possible. In other words: cities planned for humans rather than cars. The key benefits of such compact cities are two-fold: a reduction in road trauma due to fewer cars being on the road, and and increase in physical activity due to more (safe) active transport options.

Cities for Healthier Lives | The University of Melbourne Pursuit